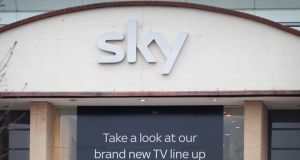 The British broadcaster received ¤382 million in subscription and advertising revenues in the Irish market in 2011, the last year for which comparative figures are available.

Subscriptions now account for 58 per cent of all television revenues in Ireland.

In a report commissioned by TV3, the London-based consultancy, Oliver and Ohlbaum (O&O) said the issue of foreign broadcasters in the Irish market should not be ignored by the Broadcasting Authority of Ireland (BAI) which is currently carrying out a five-year review under the terms of the Broadcasting Act 2009.

O&O point out that 19 per cent of all advertising revenues, amounting to ¤36 million, goes to foreign channels carried on satellite and cable platforms. Some 24 channels are involved. That revenue goes abroad and is not invested back in Irish broadcasting.

The consultants note EU law forbids cross-border regulation in the area of television, but the channels "poses a treatment to the long-term commercial viability of the Irish market" and the issue needs to be addressed.

As an alternative, it says the Irish terrestrial channels should be paid by the satellite and cable operators for their content rather than the other way around as the arrangement is at present.

O&O estimates that between ¤5 million and ¤7.5 million could be earned through copyright payments, satellite transmission costs and carriage payments.

The report was also critical of RTÉ's role in the television market place. It said RTÉ's 50 per cent share of television advertising was much more than in any other country in Europe, other than Austria, and the regulatory authorities there were putting limits on the state broadcaster ORF.

Public service
It recommended that RTÉ have a defined public service remit and that commercial broadcasting, including the acquisition of foreign programming, be left to the commercial sector.

The report conceded that a drastic reduction in RTÉ's television revenue was impractical in the short term but a halving of minutage to three minutes an hour would reduce RTÉ's advertising revenue by ¤40 million or 30 per cent.

However, restrictions on advertising time would see an increase in advertising rates from the present level which are "artificially low", the consultants state. In its own submission to the BAI, TV3 said the present broadcast market is a "gross failure" because of the dominance of RTÉ.

TV3 says it is unable to make a return above the cost of capital despite "best-in-class efficiency".