Former Fitzwilliam Square home/office at guiding at about €2.3m 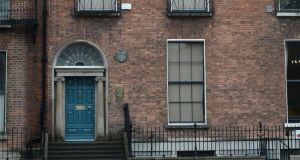 Sir Anthony O’Reilly has quietly put his prestigious Georgian property at 2 Fitzwilliam Square in Dublin up for sale. The guide price is believed to be about €2.3 million and comes at a time when the former media mogul is under pressure from AIB to repay loans of at least €4 million relating to a holiday home in Glandore, Co Cork.

It is understood the Dublin property is being sold by Jordan Town & Country Estate Agents in Kildare. Paddy Jordan, the selling agent, did not return calls about the sale yesterday.

Cryptic advert
A cryptically worded advert was placed in The Irish Times recently relating to the property. It said: “For Sale. Private Residence on Fitzwilliam Square. Immaculate Condition. With Mews. Email: property3046@gmail.com.”

An email sent yesterday to this address seeking information about the sale went unanswered.

Viewings of the property have taken place recently. Given its prime location close to St Stephen’s Green, the house is believed to have generated significant interest among investors.

One of 69 houses on Fitzwilliam Square, the four-storey over basement building has acted as a Dublin home and private office for Mr O’Reilly and his family since 1996, when he bought it for a reported €1.27 million.

It comes with a mews and four car parking spaces, along with access to the private gardens in Fitzwilliam Square.

Sir Anthony has also put Shorecliffe, his six-acre holiday home in the exclusive village of Glandore, on the market and is seeking up to €3 million.

Charles McCarthy, a local auctioneer who valued it at €4.3 million in 2009 when Sir Anthony remortgaged it with AIB, has been retained to sell the property.

The Irish Times revealed yesterday that AIB has initiated legal proceedings to call in a €4 million loan, and is seeking judgments against the former billionaire and two of his companies, including Indexia, which holds his stakes in Providence Resources and IN&M.

Efforts intensified
No comment has been available from Sir Anthony or his family, but it is likely he will dispute the bank’s claim.

It is understood Shorecliffe was quietly placed on the market last year, although efforts to sell it have intensified in recent months and the property is now listed on McCarthy’s website.

Locals say Sir Anthony has not used the six-bedroom house for more than four years.

Shorecliffe also contains three other self-contained lodgings on the grounds.

The 325sq m (3,500sq ft) main house was used as an IRA training camp in the run-up to the War of Independence.

It also has an orchard, a vine room, a salt-water swimming pool, tennis courts and a jacuzzi on the grounds.

It is believed Sir Anthony’s family will retain ownership of another property adjacent to Shorecliffe.

1 Fair Deal nursing homecare leaves little for bills and gifts
2 Getting out from under ‘never-ending’ Celtic Tiger debt burden
3 Pensions row fix could threaten future of State payment, actuaries warn
4 Tax and spend: What have FG done for your pocket?
5 Portugal set to curb tax breaks for wealthy foreigners
6 Pilita Clark: When a rude boss keeps you waiting, why not walk out?
7 Apple reports sales and profit growth over Christmas
8 Money matters: ‘My father embarrassed us with his haggling’
9 Pound dips as Bank of England decision looms
10 US budget deficit forecast to blow out by mid-century
Real news has value SUBSCRIBE