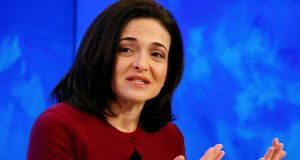 She may be one of the top executives at the world’s most successful social media company, but Sheryl Sandberg had some encouraging words for traditional media outlets yesterday.

Speaking at one of the opening sessions of the World Economic Forum in Davos, the Facebook chief operating officer said the role played by traditional media is “ever more important”.

“With so much information out there, high-quality journalism . . . that holds companies, governments, and individuals to account is really important,” she said, highlighting the role of journalism in “protecting us as individuals, and society”.

Ms Sandberg was speaking on a panel which looked at how emerging technologies are transforming industries and societies – a central thread of this year’s World Economic Forum which has chosen as its theme “the Fourth Industrial Revolution”.

According to a report released this week by the Forum, more than 5 million jobs will be lost by 2020 as a result of rapid advances in technology such as artificial intelligence.

Paul Kagame, the president of Rwanda, said that the technology revolution could be an equaliser, but noted that there would be winners and losers.

“Our job is to make sure that we narrow the gap to ensure there are fewer losers.”