RTÉ sought emergency funding from Government due to Covid-19 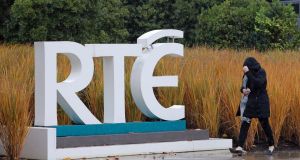 State-owned broadcaster RTÉ sought emergency funding from the Government as a result of a decline in licence fee income due to the Covid-19 pandemic, with the organisation forecasting a possible €118 million fall in revenues.

A return to the State’s lobbying register shows that the broadcaster’s director general, Dee Forbes, lobbied the Department of Communications, Climate Action and Environment. She had a Zoom call on April 8th with Minister for Communications Richard Bruton and others including the department’s secretary general. Another Zoom call took place on April 21st.

“Covid-19 has materially impacted both RTÉ’s commercial revenue and TV Licence income,” a spokesman told The Irish Times. “At present we are forecasting that RTÉ’s total revenues could be reduced by between 25-35 per cent this year as a result of the Covid-19 pandemic. Covid-19 has also had a significant impact on RTÉ’s schedules and programming, particularly in the areas of sport and drama.”

According to the latest available financial reports for RTÉ, it had licence fee revenue of €189 million in 2018 and commercial revenue of €150 million. Based on its 2018 figures, a 25 per cent decline in revenues would wipe almost €85 million off RTÉ’s revenue base this year while a 35 per cent fall would cut as much as €118 million.

While the pandemic has greatly impacted on the broadcaster’s advertising revenue, RTÉ’s return to the lobbying register pertains to a fall in the licence fee income, the organisation’s most important source of funding.

The organisation has on numerous occasions previously sought reform of the licence fee regime, arguing that there’s about €50 million the organisation doesn’t receive through licence fee evasion and as a result of households that don’t have a television but still access its broadcast and online services.

RTÉ added that the capacity of people to renew their licence in post offices – which typically accounts for about 40 per cent of renewals – “has been severely impacted by the public health movement restrictions”.

“RTÉ has already announced a series of measures to mitigate the financial impact of the crisis. We will need to do more as the economic impact becomes clearer,” the spokesman added, noting that the broadcaster is in discussions with Government on a range of issues including “longer-term structural reforms necessary to sustain public broadcasting beyond this crisis”.

A Department of Communications spokeswoman said the Covid-19 crisis highlights “the importance of public service broadcasting”. “There has been ongoing engagement with RTÉ in relation to the implementation of its revised strategy and the organisation is looking to identify where further savings might be realised,” the spokeswoman added.

The broadcaster, which is availing of the Government’s Covid-19 temporary wage subsidy scheme, was particularly active in its lobbying efforts in the period for which returns have been recently filed.

Moya Doherty, chairwoman of the RTÉ board, phoned Mr Bruton on March 25th to communicate the impact the pandemic was having on the company. On April 7th, Ms Forbes had a telephone call with Fianna Fáil leader Micheál Martin to communicate “the challenges facing public service broadcasting” the return shows. The board also hired Dublin public relations firm Q4PR to “raise awareness of the challenges facing public service broadcasting”. Q4PR held a phone call with Mr Martin on the subject.