Presenter says he is ‘hugely encouraged’ by six-figure, 18-month deal ahead of February debut 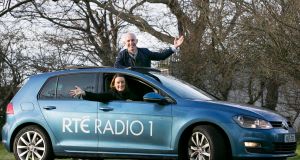 Ray D’Arcy and Jenny Kelly pictured in a branded car after Volkswagen signs on to sponsor ’The Ray D’Arcy Show’ on RTÉ Radio 1.

Ray D’Arcy’s new Radio 1 show will be sponsored by Volkswagen for its first 18 months in a six-figure deal with RTÉ.

The presenter’s new afternoon programme will debut on Monday, February 2nd. It will be produced by his former Today FM producers Will Hanafin and Jenny Kelly, to whom D’Arcy is married, and will air from 3pm to 4.30pm.

The sponsorship agreement was brokered by the agency Mediacom and includes a range of promos for The Ray D’Arcy Show across Radio 1’s schedule, as well as six sponsorship stings within the show itself.

D’Arcy said he was “hugely encouraged” by Volkswagen’s decision to sponsor the show for 18 months, while RTÉ Radio commercial director Dan Healy said it displayed “unbridled confidence” in a show that would be “a pillar of core programming” on Radio 1.

“Like many of his listeners, Ray is a long-term supporter of Volkswagen,” claimed the car manufacturer’s head of marketing, Paul O’Sullivan.

RTÉ announced in December that it had signed D’Arcy, who as well as filling the Radio 1 afternoon slot vacated by Derek Mooney is set to make a number of television programmes for the broadcaster.

D’Arcy, who began his career at RTÉ but had hosted a popular mid-morning show on Today FM, described the move as “coming home”. His slot on Today FM will be filled by Anton Savage from Monday, with another car company, Toyota, on board as sponsor.

Most programmes across Radio 1’s daytime schedule, including Liveline and Drivetime, the shows that go out before and after D’Arcy’s, saw their listenership decline in the year to the end of September 2014.

Mooney’s programme had a listenership of 198,000 at the last count, having slipped 12 per cent year-on-year. Its last sponsor was a six-month arrangement with Kleenex, which ended last August.

The next quarterly set of Joint National Listenership Research (JNLR) figures, for the calendar year 2014, will be published on February 5th.