Racecourse body to decide on media rights bid of €6.9m 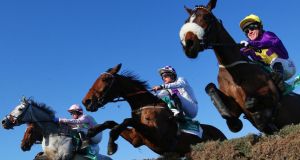 Clearing the hurdle: horses race at Leopardstown last December. A decision on the sale of the sport’s satellite and digital rights will be taken on Tuesday. Photograph: James Crombie

Irish racecourses will be asked to ratify just one media bid – worth a potential €6.9 million – when they meet next week to discuss the sale of television and other rights.

Representatives of the 26 tracks that form the Association of Irish Racecourses will meet on Tuesday to discuss the sale of satellite television and digital-streaming rights to current holder Attheraces/SIS in a deal potentially worth €6.9 million over three years.

The figure is not a guaranteed amount but an estimate of what the broadcaster will pay if its projections of the returns from the various revenue streams involved are met.

Rival joint bid
The offer contrasts with a rival joint bid from Irish broadcaster Setanta and Racecourse Media Group, which guarantees €2 million a year over five years, and offered further potential earnings over and above this figure. The existing contract with Attheraces expires at the end of 2013.

Three companies bid for the rights earlier this year and, in June, State body Horse Racing Ireland, which has the negotiating rights, went into exclusive talks with the incumbent, although Setanta and the third bidder, Highflyer, were asked to keep their offers open.

The final decision rests with the racecourses, which own the rights. The package on the table includes satellite broadcasting in Ireland and Britain, international television outside those jurisdictions, and digital streaming to mobile devices and computers to allow bookmakers to offer bet-and-watch services to punters.

It is understood that Atthraces’s projections calculate that the bet-and-watch element will account for about €3.8 million of the €6.9 million total. The Association of Irish Racecourses has told its members that broadcaster’s estimates are the result of detailed calculations.

Attheraces already broadcasts all Irish racing alongside action from a large number of British tracks on its specialist channel, which is available here and in Britain.

The Setanta deal would involve dedicated programming on its two channels, also available in both jurisdictions. Its partner in the deal, Racecourse Media Group, is responsible for Channel 4 racing and the specialist service Racing UK, both of which could screen marquee meetings from Ireland.

Bad year at races
The recession has hit Irish racing hard. Revenues from attendances and betting are down. Overall numbers at the Galway Races, which ended on Sunday, were down almost 4 per cent at 127,768 and tote turnover slipped to €4.29 million from €4.37 million.

The industry is hoping to benefit from the estimated €17 million that could be raised from the proposed tax on online betting. However, Minister for Agriculture Simon Coveney warned last year that there was no guarantee that this would be the case.

Under the Horse and Greyhound Act, Horse Racing Ireland’s three-person media rights committee, chaired by the body’s racecourse representative and including its member from the Turf Club (the sport’s regulator), is charged with negotiating media deals.