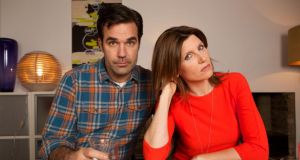 Channel 4 comedy Catastrophe with Rob Delaney and Sharon Horgan: one of the shows available on its on-demand service All 4, which evolved from 4oD

Watching on-demand? Don’t be surprised if the advertisers seem to know your name. Channel 4’s on-demand service All 4 will “imminently” roll out an ad personalisation product it tested last year with Burberry and Coca-Cola, according to Channel 4 group digital manager Michael McSharry.

In the personalised Burberry video-on-demand ads, perfume bottles were monogrammed with the initials of the registered All 4 user, while in the Coca-Cola ads, bottles bore the name of the user on the label – in an extension of its broader Share a Coke campaign. This personalisation facility will soon be extended to brands across the market, McSharry told the IAB Video Connect conference in Dublin.

The All 4 platform, which is free and was until recently known as 4oD, has 700,000 registered users in Ireland and 11.5 million registrations in total. It collects five pieces of information from users during the sign-up process – name, email, gender, age and location.

Channel 4 has also allowed some advertisers –– including Baileys, Procter & Gamble and Very.co.uk – to use “ interests targeting”, meaning they can serve ads to users based on their viewing behaviour. This, too, will be extended.

Another “big thing” for the company is its experimentation with “programmatic” (or automated) trading of the All 4 ad inventory. This will allow media-buying agencies to access its viewer data and plan the delivery of ads to targeted audience segments.

The broadcaster last month rebranded the nine-year-old 4oD – which was the first catch-up player in the world – because “we felt we needed a new home”, says McSharry. “We had outgrown 4oD to some extent.”

All 4 will become an “increasingly personalised” platform over time, but it is different from 4oD in another key respect. It presents all of Channel 4’s linear channels (Channel 4, E4, More 4), its catch-up content and its digital exclusives in one place – reflecting the fact that younger viewers increasingly do not differentiate between live television and video-on-demand.

1 Coronavirus: Property rental in the jaws of the epidemic
2 French luxury groups U-turn on state support for jobs
3 I want to change my will quickly in case I fall ill. Do I need a lawyer?
4 Staff in Dublin and Cork airports receive profit share and bonuses for last year
5 Business activity in Dublin grinds to a seven-year low due to Covid-19 impact
6 Airbnb secures $1bn investment from Silver Lake, Sixth Street
7 Medtronic aiming to make 1,000 ventilators a week in Galway by June
8 Tesla to expand lineup in China by offering Model 3 sedan
9 European and Asian shares rally for second straight day
10 Coronavirus will be cinema’s biggest villain for some time yet
Real news has value SUBSCRIBE