One More Thing: Former Hoops player gets ready for a shot at the big time in PR 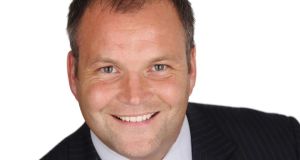 Mick O’Keeffe, lining up another goal with Pembroke Communications

O’Keeffe runs the firm of 20 staff and already owns a 15 per cent stake. Its corporate clients include Bord Gais Energy, although given O’Keeffe’s background – he also played Gaelic football for Dublin – it also has several high-profile sporting clients, such as Leinster Rugby and Dublin GAA.

The rest of Pembroke is owned by the advertising agency that operates as Publicis Dublin, although the French giant Publicis only holds a minority stake in the local operation.

The deal, which should be concluded in coming months, has been in the pipeline for quite a while but has proved complicated to close because of the ownership structure leading all the way back to Publicis, which this month had its €35 billion merger with Omnicom approved by Brussels.

O’Keeffe also has familial connections with another big PR with a sporting bias – Slattery Communications, controlled by his father-in-law Padraig Slattery.