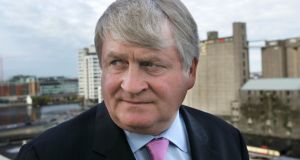 Businessman Denis O’Brien wants the High Court to order the Red Flag consulting firm to identify its client for a dossier of material related to the businessman, most of which he claims is unfavourable to him.

Mr Justice Colm MacEochaidh said on Thursday he was “surprised” to hear Mr O’Brien is not proceeding at this stage with an application - which was for hearing next Tuesday - for inspection of material photographed from devices of Red Flag and its staff.

He was responding to being told by Michael Cush SC, for Mr O’Brien, the inspection matter could be addressed later via the ordinary discovery process but his side would be seeking an order on Tuesday for identification of the client for the dossier.

The judge said he was “surprised” to be told the inspection application is not proceeding as he gave that an early date because he was told inspection was urgent and because of the issues raised, including privacy rights.

Now he was being told there would be no inspection application and wondered why there should be an early hearing for an order - known as a Norwich Pharmacal order [where an innocent third party can be ordered to disclose information relating to alleged unlawful conduct to assist the person claiming to have suffered damage] - directing identification of the client, the judge said. Such an application could be heard any time and court dates are “very scarce”.

When the judge asked was the inspection application “gone, Mr Cush said “No” and he would proceed with it if the court considered it necessary. Once the material is imaged, the need for inspection orders may fall away and the matter can be addressed in discovery applications, counsel said.

Michael Collins SC, for Red Flag, said most of the material was imaged. It seemed Mr Cush was seeking a modified version of the original orders sought and wanted disclosure of the identity of the person who commissioned the dossier, counsel said.

Red Flag opposed that and wants orders permitting it inspect the USB stick “that the court has heard so much about”, counsel said. (Mr O’Brien previously said the dossier was contained on a USB computer stick sent to him anonymously).

Counsel said there had been “engagement about the modalities of inspection” of the USB stick, it seemed some matters in that regard had “fallen away” and a recent affidavit of Mr O’Brien clarified he made certain mistakes in his original affidavit.

The judge adjourned the matters to Tuesday.

Meanwhile, the Court of Appeal heard Red Flag account manager Brid Muprhy is appealing Mr Justice MacEochaidh’s refusal last month of a stay on his order permitting the imaging of her computers and devices, including mobile phones, used for work purposes. Ms Murphy argues such imaging amounts to an unwarranted invasion of her privacy.

The appeal court was told Red Flag account executive Karl Hiney is very seriously ill and unable to give instructions whether to appeal the refusal of a stay on a similar order permitting imaging of his devices.

Mr Justice Peter Kelly fixed December 18th for the hearing of Ms Murphy’s appeal against the refusal of the stay and noted the outcome of that might also affect Mr Hiney.

Mr O’Brien initiated proceedings last October alleging a conspiracy to damage him professionally and personally. He said he believed an unknown client commissioned the dossier from Red Flag as part of the alleged conspiracy.

He hired a private investigator to investigate and a dossier of material - most of which was press cuttings related to Mr O’Brien - was later sent anonymously to him on a computer memory stick, he claimed.

Red Flag later confirmed that dossier contained its material and expressed concern how it ended up with Mr O’Brien. It also said it had a client for the material but declined to identify that client.

The businessman’s lawyers initially applied ex parte (one side only represented) for a search and seizure order (known as an Anton Piller order) allowing them enter the Red Flag offices and seize computers and other devices.

That order was refused by the president of the High Court, Mr Justice Nicholas Kearns, as “quite draconian” and he instead made orders essentially aimed at preserving the material pending a decision whether Mr O’Brien was entitled to access it.

Mr O’Brien’s side got further orders in later hearings allowing their digital forensic experts photograph the material which was then to be put in storage by an independent solicitor pending a decision whether Mr O’Brien could inspect it.

1 Google tells workers to return to country where they are employed
2 The Devlin hotel operator sues insurer over Covid losses claim
3 Subway bread too sweet for the Irish tax authorities
4 Stillorgan apartment portfolio at €9.7m offers 5.5% yield
5 Leslie Buckley retires from Digicel board
6 Benefacts facing closure due to funding doubts
7 Sean Quinn stunned at rebranding of Quinn Industrial Holdings
8 Probate is changing: What does that mean for you?
9 Will tracker mortgage be at risk if Ulster Bank closes?
10 CRH finance chief announces surprise exit
Real news has value SUBSCRIBE