Newspaper sales down across the daily and Sunday markets 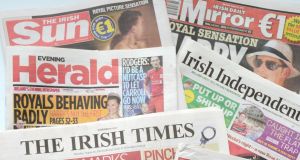 Newspapers sales in Ireland fell in the second half of 2013, with the market for both daily and Sunday titles shrinking by more than 6 per cent

Newspapers sales in Ireland fell in the second half of 2013, with the market for both daily and Sunday titles shrinking by more than 6 per cent, according to figures released by the Audit Bureau of Circulations.

The print circulation of almost all the main titles retreated, continuing a trend that dates back to 2007, the ABC report shows.

While not included in the data collated by the ABC, The Irish Times Digital Edition has recorded daily sales of 2,887, taking the combined net sale for the print and digital editions of the title to 84,964, down 6.2 per cent.


Decline
The Irish Examiner now sells 37,009 copies, down 6.4 per cent, while the Cork-based Evening Echo , saw its circulation decline to 14,157. Both titles are now owned by Landmark Media Investments, the holding company formed by Tom Crosbie and his father Ted after Thomas Crosbie Holdings went into receivership in March 2013.

However, the Irish Daily Mail , published by Associated Newspapers Ireland, managed to buck the declining trend, adding 24 copies on year-on-year to record a circulation of 49,007.


Sunday market
The Sunday Independent , which is the biggest-selling title in the Sunday market, sells 229,382 copies, which was down 3.3 per cent compared to the second half of 2012. The Sunday World , also part of the INM stable, saw its circulation fall 4.1 per cent to 208,281, while the Sunday Times also lost ground with sales of 92,643, down 8 per cent.

Sales of the Sunday Business Post were 34,322 in the second half of the year, down 12.9 per cent. This was the first full six-month period of circulation for the title since it was bought out of examinership by Key Capital and newspaper executive Paul Cooke.

The publishers of the Sunday Business Post said in a statement that circulation had grown 5 per cent month- on-month since it was redesigned in November.

Mr Cooke said the title was “now firmly in a recovery process” and that the investors were “looking forward with confidence to informing the market of further exciting plans and developments” in the coming months.

The best-selling consumer magazine in Ireland, the RTÉ Guide , has a circulation of 57,062, down 7.8 per cent.