Movie executive who believes if she builds it they will come

After securing the TV production of Penny Dreadful, Ardmore is now turning away big- budget productions 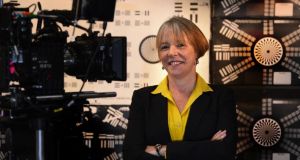 Behind the security gates of Ardmore Studios outside Bray is a phantasmal world dedicated to some of the great characters of gothic horror literature.

Dracula, Frankenstein, Dr Jekyll and Mr Hyde and Dorian Gray lurk among the spacious studios filled literally to the rafters with lighting rigs.

Ardmore was first set up in 1958 at the back end of a dreary decade. At one stage it was nationalised and everybody who is anybody in Irish film has filmed here at one time or another. There have been 14 Oscar award wins for feature films shot at the studios among the 100-odd films filmed here.

Penny Dreadful is a lavish production, with an envious ensemble cast including Timothy Dalton, Eva Green, Josh Hartnett and Billie Piper, among many others.

The producers have refrained from using CGI so every mask and special effect has to be physically created. Verisimilitude costs a lot of time and money.

The series spend in Ireland is €33 million and the second series, consisting of 10 one hour episodes, is being filmed until the end of April next year.

Every one of Ardmore’s five stages comprising 40,000sq ft total, and its two back lots are full, as are the 100,000sq ft of support buildings including workshops, production offices, props stores, costume rooms, dressing rooms and hair and makeup rooms.

Penny Dreadful, based on the pot-boiler Victorian novels of the same name, was created by the well-known British director Sam Mendes and John Logan, the Irish- American screenwriter whose credits include the of James Bond movie, Skyfall.

They had originally intended to shoot in Britain as Penny Dreadful is set in Victorian London, but demand for studio space is ferocious. Ardmore stepped into the breach with an attractive package.

Securing Penny Dreadful for Ardmore Studios was a coup for its relatively new chief executive Siún Ní Raghallaigh who took over in 2012.

Ardmore had good years between 2006 and 2010 when The Tudors and Camelot were in town, but the studio lost out on big productions after that. At the time, Ní Raghallaigh says, the studio was on the verge of closing. “There was virtually nothing here,” she recalls, despite the fact that the Irish audio-visual industry, fuelled by big-budget foreign productions, had survived the recession very well.

Ní Raghallaigh has a track record with struggling media businesses. Born into an Irish-language household in Dunfanaghy, Co Donegal, she started out as a finance manager for Elan, the shipping side of DHL and studied certified accountancy at night. It took her six years to qualify.

“My feeling on it is that accountancy is a fantastic grounding to have. I never worked as an accountant, but one of the best things I did was slog for six years to do that. It is a great grounding for business. I don’t know how I would get through business without it.”

Her next posting brought her into the wide world of media. She became financial controller at the Sunday Tribune at a time when the paper was still a standalone entity managed by Vincent Browne and Barbara Nugent.

“I went to work there because I was a reader. They were amazing people. We pretty much pulled together as a team. There were normal tensions, not to the degree that you think. It was a great place and great journalists came out of there.”

It was never easy, not least when the ill-fated Dublin Tribune was launched. Wholly dependent on advertising, it was set up in 1990 and closed scarcely a year later when the first Gulf War caused advertisers to close their wallets.

Her next venture was starting TnaG (Teilifís na Gaeilge) from scratch. “We had a field in Connemara at the beginning. We built it within a year and a half. It was an amazing privilege.”

The channel began broadcasting in October 1996 and she set about creating the business structure for the organisation while establishing relations with the independent producers who continue to provide the bulk of programming.

Later she became director of marketing and development and oversaw its rebranding from TnaG to TG4, becoming managing director in 2000. She is currently TG4’s chairwoman.

Post-TG4, she joined Tyrone Productions, one of Ireland’s largest independent television production companies and creator of Riverdance, as chief executive.

In July 2012, she took over Ardmore Studios. At the time the big productions were coming into rival studio Ashford run by producer Morgan O’Sullivan.

Penny Dreadful was set up in Ardmore in the summer of last year and they were shooting from October until February. The production is so well funded that they were able to keep a reservation in place until the second series was confirmed.

The famine has turned into a feast for Ardmore which is now turning away big budget productions.

Ní Raghallaigh says Ardmore needs to expand, but the studio lacks the resources to do so sufficiently. She wants the Government to commit half the cost, €15 million, of a new 100,000sq ft studio, the other half coming from the industry, most notably Ardmore’s own resources.

For now Ireland has 111,000sq ft of industry standard studio space and Ní Raghallaigh suggests that an additional 100,000sq ft at least is urgently required in the Republic.

If the commercial opportunities are there, why does the private sector not fund it instead? “Step back from things and look at the structure of the industry. We do not produce content. Where we fit in, we see ourselves as the enabler. Our margins are very tight. It would take us too long to build up a reserve.”

She maintains the North’s burgeoning audiovisual sector has already grasped the potential. From having no studio space six years ago, it will have more studio space than the Republic next year.

Two new studios and film production workshops have been approved for the Titanic Studios in Belfast, also known as the Paint Hall. They will add another 100,000sq ft of space, almost as much as is the entire studio space in the Republic.

The studio is being backed by the government-funded agency Northern Ireland Screen.

Every day during the Penny Dreadful shoot, she says, 350-500 people come through the gates of Ardmore Studios to go to work. “They are walking out on foot because they are local people.”

“The lack of suitable studio space is an issue of great concern for the industry. We ourselves have had to turn away business in the past year because we simply do not have the required capacity. Studios are the essential enablers for the industry to scale. The ability to build up a capital fund for reinvestment in infrastructure is extremely limited and can take years.

“There is growing international interest in Ireland as a production location thanks to the positive tax incentives under section 481. However, the missing piece of the jigsaw is the availability of appropriate full-service studio space in the country.”

Last year the Government changed the funding model from the investor-led scheme to a simple tax credit, which is worth a third of the cost of production. This is a major incentive for overseas productions to come to Ireland even at a time when there is fierce international competition.

In the budget, Minister for Finance Michael Noonan said he would consider extending the eligible spend for big budget productions from €50 million to €75 million, a further enticement to major productions.

“The Government is to be applauded for creating the right environment to attract productions,” Ní Raghallaigh says. “However, it is falling short by not addressing the need to incentivise and accelerate the creation of vital studio infrastructure to cater for these productions. Without this support, growth will be very limited.”

In 2011 the Government published the Creative Capital report which set a highly ambitious target of doubling the size of the industry from €500 million to €1 billion within five years. Such a target cannot be achieved without much greater infrastructure investment, she believes.

“It is akin to encouraging airlines to fly to Ireland by removing the travel tax, but at the same time not having the airport infrastructure to meet the increased demand.”

Ní Raghallaigh says hers is not a solo run and that she has the support of the whole industry in her endeavours to secure government funding for a new studio. She says all the Government departments involved – Arts, Heritage and the Gaeltacht, Enterprise and Finance – are receptive to her idea, but getting it across the line at a time when money is still tight is another.

“We’re still talking to them and people are listening. It resonates with people. It is up to the industry to keep pushing that agenda, making the case for it. We make the case for it every day,” she says.

If secured, she believes many of the high-labour costs which drag on Ireland’s competitiveness as a film destination can be addressed.

“We aren’t as competitive as we could be but I come back to the point of scaling. When you have a [wage] level that is up and down, because the people involved don’t know if they are going to have work for the next six months – the more we scale this industry, the more this goes away. We need to take charge of the industry.”