Media review 2014: Quotes of the year 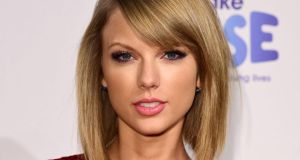 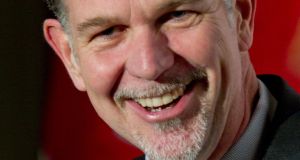 Reed Hastings: “. . . the horse was good until we had the car.” Photograph: Norm Betts/Bloomberg 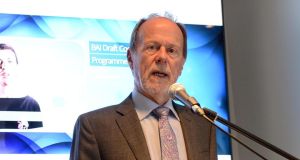 Bob Collins: “It doesn’t matter how many media outlets we have.” Photograph: Eric Luke

“Denis O’Brien is the major shareholder in INM. In theory, with 29 per cent of the shares, he does not control it. In practice, he does.”

Outgoing Sunday Independent editor Anne Harris writes about Independent News & Media ownership matters in the newspaper’s City edition of July 20th. The words “In practice, he does” did not appear in later editions.

“I believe you have to destroy a radio station in order to rebuild it and that’s what it’s about.”

Head of RTÉ 2fm Dan Healy describes the process of revamping the station’s schedule at an international radio industry conference held in Dublin in March.

“Every day I receive a video from a friend of their daughter singing Let It Go in the backyard.”

Idina Menzel, who voiced Elsa in Disney’s Frozen, has got to hear some other versions of her hit song this year, as have Irish parents. The Let It Go singalong was the most watched YouTube video in Ireland in 2014.

“It’s kind of like the horse — you know, the horse was good until we had the car.”

Netflix chief executive Reed Hastings says broadcast television will last until only about 2030, as video-on-demand services like his own - the “car” in this analogy - take up more viewing time.

“It’s not that RTÉ weren’t good to me, but they had no money to make the shows I wanted to make.”

Presenter Baz Ashmawy, now a favourite of Sky, reflects on his relationship with the national broadcaster.

“The point is that as a journalist I have never been in any doubt that PRs are the enemy.”

“Everything new, like Spotify, all feels to me a bit like a grand experiment. And I’m not willing to contribute my life’s work to an experiment.”

Singer Taylor Swift on pulling her music from the Spotify streaming service. Her life’s work remains a succession of massive hits.

“It doesn’t matter how many media outlets we have, if it is about the dull, boring repetition of ideas.”

Bob Collins, who finished his term as Broadcasting Authority of Ireland chairman, notes that having lots of news media organisations doesn’t necessarily mean that any of them are any different or any good.