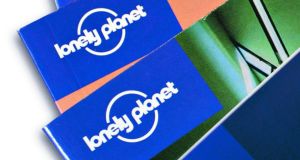 Lonely Planet has announced details of a hiring drive for its new base in Dublin, the city the travel publisher describes as “confidently multicultural” and “sprinkled with hedonism” – albeit not quite as “sexy or as sultry as other European capitals”.

The company, which is owned by US tobacco billionaire Brad Kelley, has confirmed its intentions to add to the headcount at its new offices in the Irish capital by advertising for a Dublin-based development team leader, senior software developer, social news co-ordinator, global news editor and global news reporter.

Lonely Planet, known for its often blunt travel guides, is expanding its content and developer functions here under operations director Nóirín Hegarty, the former editor of the Sunday Tribune newspaper.

Lonely Planet was founded in the 1970s by Belfast-born Maureen Wheeler and her husband Tony, who grew the business into an empire of “backpackers’ bibles” after the success of their first travel guide, Across Asia on the Cheap. For many years its headquarters were in Melbourne, Australia.

The company’s Dublin offices are located close to one of the city’s busiest tourist attractions, the Guinness Storehouse, which it dubs “the beer-lover’s Disneyland”.