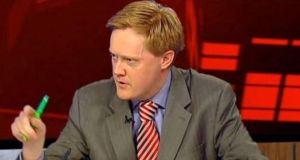 Fionnan Sheahan replaces Claire Grady, who unexpectedly stepped down as editor in August after just a year in the job.

Announcing the appointments, Independent News & Media (INM) said both individuals would take up their new roles with immediate effect.

Mr Sheahan replaces Claire Grady, who unexpectedly stepped down as editor in August after just a year in the job.

His appointment had been widely predicted but Mr Bourke’s elevation comes as something of a surprise with several other leading media figures said to have been in the running, including Sebastian Hamilton of the Irish Daily Mail.

Mr Bourke replaces Anne Harris at the helm of the Sunday Independent, the State’s best-selling Sunday title, who stood down just before Christmas after two years in the role.

Mr Sheahan was Irish Independent’s political editor, having joined the title as a political correspondent from the Irish Examiner in 2005.

He takes up the role after serving as the group political editor of INM, managing the political coverage of the Irish Independent, Sunday Independent, Herald and Independent.ie, since 2013, IMN said in a statement.

The media group said Mr Bourke had been responsible for the daily production and news delivery on the Irish Independent for the past 18 months, having joined the paper in 2007 as an assistant news editor.

Both Mr Sheahan and Mr Bourke will work under INM editor-in-chief Stephen Rae.

“At INM we put great store in developing our talent across online and print. Both new editors have a passion for media and vast experience of news reporting at the highest level. Fionnan and Cormac will bring a fresh perspective to the titles and the delivery of content to our audiences,” INM said.