In defence of Tubridy, host of the 26th-ranked radio show 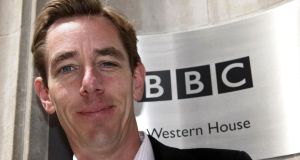 Not for the first time, Ryan Tubridy will have been glad last Friday to have been safely ensconced in the BBC Radio 2 studios. In Ireland, the headlines didn’t look too wonderful as the newspapers dissected 2fm’s latest listenership figures and pointed out that ex-Westlifer Nicky Byrne, who follows him in the schedule, officially has a bigger audience than him.

In London, surrounded by the BBC team, Tubridy could chat about the Commonwealth Games, link to traffic updates on the state of the M25 and concentrate on broadcasting to millions. It was “all-request Friday”, and Tubridy, sitting in for Simon Mayo, introduced records such as George Harrison’s Got My Mind Set on You and Thin Lizzy’s The Boys are Back in Town that wouldn’t, incidentally, be allowed on “youth station” 2fm.

Tubridy is regarded as a safe pair of holiday-cover hands by the BBC, which seems happy to stick him in a slot that normally gets six million-plus listeners. But the best part of the gig must surely be that the only pressure involved is the pressure he puts on himself – the pressure to impress enough to be asked back. Expectations will always be lower for a summer substitute.

Back home, however, Tubridy receives a bigger paycheque than anyone else from RTÉ, for which he presents Friday night television institution The Late Late Show and the country’s 26th most popular radio show.

There is something badly wrong with the second half of that sentence. How can it be that the man deemed the best option for the flagship format that is The Late Late Show is helming a radio programme on a national, commercial station that is only the 26th most listened-to in Ireland?

It is right that there is a spotlight on Tubridy, given that he earns – according to the last published figures (for 2012) – €495,000 from RTÉ. But you do not have to be a fan of him as a broadcaster to acknowledge the performance of his show on 2fm is more symbolic of the station’s woes than it is responsible for them.

The Joint National Listenership Research (JNLR) survey published last Thursday shows Tubridy’s 9am-11am programme on 2fm now has 144,000 listeners. Having slipped out of the list of top 20 radio programmes a few surveys ago, it is now not even 2fm’s most listened- to show, as that dubious honour goes to the slot occupied by The Nicky Byrne Show with Nicky and Jenny (Greene), which has 145,000 listeners.

This makes it look like it is Tubridy that is the problem, not 2fm. A boring technicality suggests this would be unfair to him. Nicky and Jenny broadcast for three hours, while Tubridy’s show is a merciful two, and a three-hour programme will always have the advantage over a two- hour one in the JNLR survey. (This is why Today FM always points out, for transparency, that Ray D’Arcy’s three- hour show still has more listeners than Tubridy – about 40,000 more – on the more equitable “average quarter hour” measure.)

Tubridy’s 2fm predecessor, the late Gerry Ryan, had a three-hour show too. When he died, in 2010, a chunk of his 296,000 audience simply stopped listening to the radio. Tubridy, who began his current 2fm show in August that year, immediately found himself in the unfortunate position of being the “face” of 2fm’s decline. Initially, this was purely for the crime of not being Gerry, a radio one-off.

Throughout the following year, each quarter that the JNLR figures came out, they showed repeated plunges in listenership for the Tubridy slot. But it wasn’t the case that fresh batches of weary radio listeners were deciding they were done with him – rather, because the JNLR survey is conducted on a rolling basis over the course of 12 months, it took some time before Gerry Ryan’s faithful audience stopped showing up in the figures.

The first true Tubridy figure clocked in at 175,000, meaning his listener losses since then amount to 31,000 people. That’s still not good, of course – it means about 18 per cent of his original audience has abandoned him – but it sounds less dramatic than the wipeout you get if you hark back to the Gerry days.

Tubridy must be ruing the day RTÉ bosses persuaded him it would be good for his career to leave Radio 1 and go back to 2fm. That this occurred during a brief period when RTÉ was misguidedly repositioning 2fm for 20-44-year-olds, rather than 15-34-year-olds, only underlines what a misuse of the presenter this was. 2fm is now chasing younger listeners in a bid to save itself, with a playlist and a risk-taking attitude to match. The logical next step is to put Tubridy back where he belongs: on Radio 1. He will fit in better there. Where 2fm fits in is still open to question.