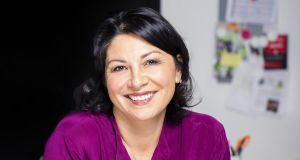 Image Publications has hired a full-time web editor in a bid to “find a voice for the magazine online”.

Beauty writer Ellie Balfe is now “editor of all things online” for Image , which this week relaunched Image.ie as “its own title”, according to group editorial director Laura George.

Image is believed to be the first of the monthly glossies in Ireland to employ a full-time online editor and the move is likely to be followed by the development of a digital media platform for its other titles, such as Image Interiors .


In-house design
George and Balfe have been working on Image.ie since January and the experience has been “a vertiginous learning curve”, says George.

About 80 per cent of the content on the site is commissioned directly by Balfe rather than simply reproduced from the print magazine as was previously the case.

“As a company we have been through the wars like everybody else, but the investors have made a decision to expand the brand,” says George.

The look of the site was designed in-house, with web developers Fusio contracted to build the back end.

Promotion of the new site through Image’s social media presence – it has 12,000 fans on Facebook – combined with geo-targeted advertising on Dailymail.co.uk led to a major surge in web traffic on Monday, George says.

Consumer magazines can make money online, she believes. “I think it’s on the cusp of becoming something we can be serious about. I feel differently about it than I did a year ago.”

Image also has an app, which unlike the site is “a straight upload” of the magazine. Image.ie serves as “brand enhancement” in the first instance, but George plans to build up its e-tailing side over the coming months. Electric Media has been hired to sell online advertising.


Game face
The product-led nature of consumer magazines means titles such as Image , which has a print circulation of 21,500, have had to adjust their tone and content to more austere times, however.

“Living well (and with a modicum of style) is about attitude more than acquisition,” Image.ie claims in its mission statement.

“Magazines have always been aspirational. Image was aspiration with a dash of reality. But now we’re the exact flip of that,” says George.

New features such as “Working It” are about making the best of what you have, she says. “Every day you have to go out and put on your game face with what you can afford.”