No opposition to the winding-up order for TCP, which is insolvent with some €7m liabilities over assets 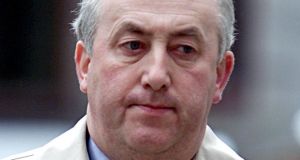 Mr Justice Peter Kelly: said he was satisfied to appoint as official liquidator Tom Kavanagh, of Kavanagh Fennell, the nominee of Webprint Concepts Ltd, owed some €2.3m by TCP, which has sued TCP and others over the loss of its printing contract for TCH titles.

The High Court has made orders winding up Thomas Crosbie Printers Ltd but refused to accept the company’s nominee as official liquidator and has appointed the nominee of two large creditors of the company. TCP is a subsidiary of the Thomas Crosbie Holdings media group.

Mr Justice Peter Kelly said he was satisfied to appoint as official liquidator Tom Kavanagh, of Kavanagh Fennell, the nominee of Webprint Concepts Ltd, owed some €2.3m by TCP, which has sued TCP and others over the loss of its printing contract for TCH titles. Ulster Bank, owed some €7m, had supported either Mr Kavanagh or any nominee of the court but not the company’s nominee.

In his decision, the judge stressed there were no issues concerning the competence or integrity of either nominee for official liquidator – Mr Kavanagh or Michael Cotter of Ernst & Young, City Quarter, Lapps Quay, Cork.

He found TCP had given no satisfactory reasons why the court should depart from the normal practice that, when there are two nominees for liquidator, the nominee of creditors would be appointed.

There was no opposition to the winding-up order for TCP, which is insolvent with some €7m liabilities over assets, but the issue was the appointment of an official liquidator.

Webprint and TCP had also drafted what the judge called a “shopping list” of tasks for the liquidator including, in Webprint’s case, asking him to investigate whether TCP had traded while insolvent. TCP had asked that its directors – Mr Thomas P Crosbie and Mr G Alan Crosbie – should be notified of any applications by the liquidator.

The judge said he would not make any such directions as the liquidator was an officer of the court with statutory duties who had to report to the court and decide for himself what issues had to be addressed. It remained open to the parties to make application to the court when the liquidation was actually under way, he added.

Earlier, Garvan Corkery, for TCP, had argued Webprint’s nominee should not be appointed on grounds including that Webprint is involved in litigation against TCP and others. Webprint has sued arising from what it alleged was the “contrived” restructuring of the Thomas Crosbie media group resulting in it incurring substantial losses and its contractual rights being breached.

Webprint should be regarded as an adversary rather than a creditor, Mr Corkery argued. Webprint, he submitted, was trying to commandeer the liquidation in its own interests.

Frank Kennedy, for Webprint, queried whether it was correct to describe Webprint as an adversary when another High Court judge had found TCP had no prima facie defence to either Webprint’s claim for arrears on its printing contract and no prima facie defence to many aspects of its breach-of-contract claim. Webprint believed the liquidator should engage in an investigation into the financial position of TCP over a number of years with a view to establishing if it had traded while insolvent, counsel outlined.

Jane Marshall, solicitor for Ulster Bank, said it supported the application to have either Mr Kavanagh or another person chosen by the court appointed official liquidator.