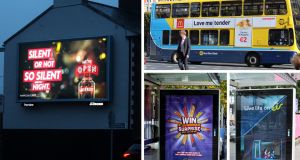 It was back to business as usual on Ireland’s billboards last year, as Guinness owner Diageo reclaimed its position as the biggest out-of-home advertiser.

Diageo spent its way to a 4.6 per cent “share of voice” in the market, putting it ahead of McDonald’s, which was in second place with 3.2 per cent, according to the end-of-year Posterwatch report by PML Group.

In 2014, when Cadbury’s parent company Mondelez was the biggest out-of-home advertiser, it marked the first time since 2008 that Diageo had not been the biggest spender.

Third spot went to Eir, which ran campaigns to promote its rebranding from Eircom and also to market its mobile brand Meteor.

Campaigns for Diageo, McDonald’s and Eir all had a 20-30 per cent higher display value than they did in 2014, PML said.

The top five out-of-home advertisers are completed Sky and Mondelez, but the latter cut its spending by almost 50 per cent. Heineken, Coca-Cola, Virgin Media, Vodafone and Mars rounded out the top 10.

Virgin Media, which rebranded from UPC in October, substantially increased its spending on out-of-home ads in 2015, which helped the telecoms sector as a whole overtake banking as the biggest category of advertiser last year. Telecoms accounted for more than 10 per cent of the market.

The retail sector was the third biggest category, thanks to campaigns by Lidl, Tesco and SuperValu.

The overall market grew by 6 per cent in 2015, repeating the level of growth it recorded in the previous year.

“For the first time in many years we are seeing consistent and consecutive growth across quarters. Demand is high in the market and advertisers have reacted very positively to improvements in the medium,” he said.

Last year saw the introduction of JCDecaux’s back-lit Première units, which replaced a number of older 48-sheet and 96-sheet billboards at various locations around Dublin.

There are more than 2,200 digital out-of-home screens available to advertisers in the Republic, according to PML. Movie studio Warner Bros was the biggest advertiser on this format last year, followed by Sky and Heineken.

“Advertisers are flocking to the screens. It’s quite the success story in what was a period of terrible decline for the advertising industry as a whole,” said Mr Harmon.

The out-of-home specialists expect the general election, Euro 2016 and the Olympics will boost the market by a similar growth rate again this year.