Former TCH chairman says receivership made him feel like a failure 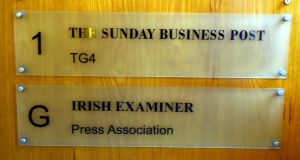 The name plate of the Harcourt Street offices for the The Sunday Business Post and The Irish Examiner. Photograph: Brenda Fitzsimons/The Irish Times

The former chairman of Thomas Crosbie Holdings (TCH) Alan Crosbie has said that he did not have the financial resources to invest in the company after it went into receivership.

Mr Crosbie, who is the fifth generation of the Crosbie family to be involved in the business, admitted he felt like a failure when TCH went into receivership in February.

TCH, which includes The Irish Examiner, The Sunday Business Post and a host of provincial titles, went into receivership in February with debts of €27 million.

The business was immediately sold to Landmark Media Investment Ltd (LMI) set up by Tom Crosbie, a cousin of Alan Crosbie. It continues to publish The Irish Examiner, which is now printed by The Irish Times. The Sunday Business Post remains for sale.

Mr Crosbie (58) said “frankly I couldn't afford to” when asked by RTÉ's Miriam O'Callaghan if he thought about investing in the new company.

He also said his son Rob's Down Syndrome was another reason why he opted not to invest in the new company as he needed to secure his son's long term financial future.

Speaking on RTE’s Miriam Meets programme, where he appeared with his sister Pat Crosbie, a former ballet dancer and wife of Kinks' singer-songwriter Ray Davies, Mr Crosbie said he knew by the end of February there was no hope for TCH.

The company's revenue halved following the economic collapse which occurred in 2008.

He said the phenomenon of newspapers giving away their content for free was a “huge mistake that I'm not sure the newspaper industry is going to recover from”.

“We couldn't continue the way we were going," he said. "For me it was not a moment. It was a death by a thousand cuts. You always held out hope, but it was not until the end of February, beginning of March, that I realised we had no chance of continuing."

Mr Crosbie said he felt like a failure as a result of the receivership "but I hide that. There's no point in going around with your head down. I keep looking back and thinking what I would have done, but hindsight is very easy.”

Mr Crosbie said he was thankful the majority of jobs at TCH will be saved. He added that all past decisions, whether right or wrong, had been made in the best interests of the company.