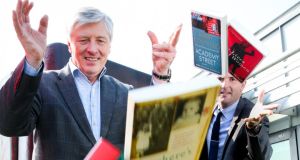 Pat Kenny with Eason group head of marketing Brendan Corbett, at the launch of the Eason Book Club, a segment on Kenny’s Newstalk show.

Eason has teamed up with Newstalk for a monthly book club segment that will run on The Pat Kenny Show. The books chosen for review will be discussed by former Fianna Fáil minister Mary O’Rourke, singer-songwriter Brian Kennedy and Mrs Brown’s Boys star Rory Cowan – who comprise a “diverse panel of literature enthusiasts”, according to Kenny.

One book from a shortlist of four recommended by Eason will be selected on the first Monday of every month as “book of the month” and listeners will be encouraged to read it and tune in later in the month for the review.

Kenny promises “strong and entertaining opinions” and thought-provoking debate, while Brendan Corbett, Eason’s group head of marketing, said the book club would both “make for great radio” and give the retailer the opportunity to showcase books across all genres and for all ages.

Newstalk has been keen to promote the message in recent years that the station isn’t simply a feed of rolling hard news and current affairs. Station editor Garrett Harte has said he wants to dispel the idea, prompted by its “foreboding” name, that Newstalk is “Sky News on radio”.