DVD player ownership in Ireland is on the slide

Seven in 10 homes still have one, but Comreg figures show rate has declined 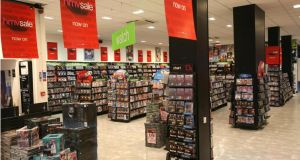 There has been a “slight decline” in the number of people who own DVD players. Photograph: Dara Mac Donaill

The concept of “sticking on a DVD” will already seem antiquated to those early adopters who are adept at finding whatever it is they want to watch on some streaming service somewhere, whether official or not-so-official.

But figures from the Commission for Communications Regulation (Comreg) confirm that that ownership of DVD players has gone into reverse.

Comreg calls the trend a “slight decline”, but the writing may be on the wall for the Digital Versatile Disc.

As far back as 2012, the Central Statistics Office removed rented DVDs from the basket of typical consumer goods used to calculate inflation. Mind you, it also got rid of ladies’ slippers . . .