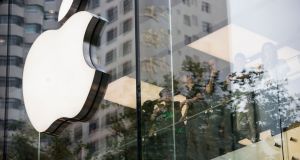 Apple’s decision to allow the installation of ad blockers under its iOS9 operating system has sparked a flurry of downloads for cheap or free apps that allow users to avoid pop-up ads and other potentially irritating forms of advertising on mobile browsers. Photograph: Qilai Shen/Bloomberg

Online advertising trade body IAB has formed a new set of industry guidelines for digital ads that it says will reduce the frustrations that have led to a surge in the use of ad blockers.

New “best practice” principles known as the LEAN rules “will help guide the next phases of advertising technical standards” and improve the experience of users, IAB said.

The organisation said it was determined to “deal at source with the causes of consumers’ increased use of ad blockers”.

IAB’s vice president of technology and ad operations Scott Cunningham admitted in a frank blog post that the ad technology built to maximise the amount of money publishers could glean from marketing budgets had been counter-productive.

“We messed up,” he wrote. “Looking back now, our scraping of dimes may have cost us dollars in consumer loyalty.”

The industry “lost sight of our social and ethical responsibility to provide a safe, usable experience for anyone and everyone wanting to consume the content of their choice”, he added.

The growing popularity of ad blockers, dubbed the “adblockalypse”, has left publishers afraid that business models that partly or wholly depend on digital advertising for revenues have been fundamentally undermined.

Ad blockers pose “a threat to the internet and could potentially drive users to an enclosed platform world dominated by a few companies”, Mr Cunningham also wrote.

Next month IAB Europe will release a report on digital advertising that will outline “what is at stake for consumers, publishers and the European economy if ad blocking becomes more pervasive”.

Suzanne McElligott, the IAB Ireland chief executive who sits on the body’s Europe-wide taskforce on ad blocking, said its initiatives would “ultimately result in deeper user engagement in digital advertising”.

Apple’s decision to allow the installation of ad blockers under its iOS9 operating system has sparked a flurry of downloads for cheap or free apps that allow users to avoid pop-up ads and other potentially irritating forms of advertising on mobile browsers.

The tech giant recently approved, and then removed from the App Store, an adblocker called Been Choice, which had the ability to block ads within apps, including those that appear on Facebook.