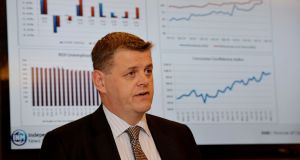 Independent News & Media (INM) saw pre-tax profits jump nearly 30 per cent to €37.4 million last year on the back of digital advertising revenue growth, reduced interest costs and what it described as a “prudent management of the cost base”.

However, circulation revenue at the media group, which publishes the Irish Independent and the Sunday Independent, declined by 4.1 per cent to €101 million, albeit the company said its paper sales were down less than the industry average.

Total group revenue was up 0.8 per cent to €321.2 million. If loss-making GrabOne coupon business, which was shut down in November 2015, is excluded, the revenue rise is 1.2 per cent.

The company’s performance was driven by growth in total advertising revenue, which was up 3.4 per cent at €2.8 million, and a 5 per cent increase in distribution revenue, both of which helped offset the decline in circulation revenue.

INM ended the year with an increased cash balance of €59.7 million, primarily of better earnings and preduced interest charges following the repayment of debt.

This result was generated primarily from a strong EBITDA performance, good working capital management, the sale of APN and reduced interest charges following the repayment of Group debt.

The company’s debt was reduced from €6.1 million to €1.9 million in 2015 and no interest charge is expected in 2016 in light of the repayment of group debt.

“The group delivered a strong performance in 2015 considering the strong headwinds the sector is experiencing,” chief executive Robert Pitt said.

“The strengthening of the recovery in Ireland’s economy created a positive environment for improved business and consumer sentiment which buoyed advertising particularly.”

The indications for 2016 suggest that “the existing challenging market conditions will continue in the coming year”, he said, as the print publishing industry faces rapid structural change.