Irishwoman is currently head of Discovery Channel in Europe 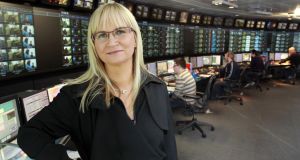 The next director general of RTE is expected to be Dee Forbes, an Irishwoman who is currently head of the Discovery Channel in Europe.

Dee Forbes, the Irishwoman who is currently head of the Discovery Channel in Europe, has been appointed the next director general of RTÉ.

The RTÉ board met on Friday to approve the selection of Ms Forbes, who was successful in an independent competitive process.

The appointment must be formally approved by the Government, though political sources say that this is likely to be a formality. Under the broadcasting acts, the government “consents” to the appointment, rather than actually making the appointment itself.

Currently based at the Discovery Channel’s European headquarters in London, Ms Forbes will take up her appointment “later this year after a transition period” following the departure of outgoing director general Noel Curran at the end of April.

Mr Curran’s term ends on a high note after RTÉ’s much-lauded season of 1916 Centenary events and coverage of the commemorations. The station’s finances have also been stabilised during his five year term.

There will be surprise at RTÉ, where the top job has traditionally gone to an insider. Many expected the head of news and deputy director general Kevin Bakhurst to succeed Mr Curran. Other names thought to have been in the frame for the job include head of television Glen Killane, Independent News and Media editor-in-chief Stephen Rae and former TV3 chief executive David McRedmond.

A native of Drimoleague in west Cork, Ms Forbes is a graduate of history and politics at UCD.

“Although it was a tough professional decision to leave Discovery, the personal decision to return to Ireland and lead its biggest broadcaster, RTÉ, is an opportunity of a lifetime,” she said on Friday.

Moya Doherty, chairwoman of the RTÉ board, said the appointment marks a “significant moment” in the development of the broadcaster.

“Not only is this the first director-general in almost 50 years to be appointed externally, but she will also be the first female to hold the role,” she said. “RTÉ is at a pivotal moment, one where the future shape and financing of public service broadcasting is being re-imagined. I am delighted to have someone with such a breadth of industry experience, such a creative and visionary understanding of the global broadcasting market, and a proven management record.”

Discovery Channels broadcasts to over 276 million households across Northern Europe each month, including in the UK, Ireland, Norway, Sweden, Denmark, Finland and the Netherlands.

She is a former non-executive director of the board of The Irish Times. She previously worked at Turner Broadcasting, part of Time Warner, where she ran Turner’s business in the UK and Ireland which consisted of seven entertainment channels including Cartoon Network, Boomerang and TCM.