FCC moves to scuttle the deal leads Comcast to walk away 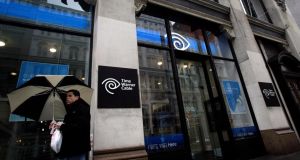 A man walks past the Time Warner Cable headquarters in New York. Comcast said the deal had been structured in a way that if the US government didn’t agree, the companies could walk away

Comcast and Time Warner Cable confirmed on Friday they had abandoned their proposed $45 billion merger.

Comcast said the deal had been structured in a way that if the US government didn’t agree, the companies could walk away.

“Today, we move on,” Comcast chief executive Brian Roberts said in a statement.

The deal had faced vocal criticism from some politicians, media company executives and diverse consumer and industry groups, who had worried it would create a monolith with too much control over what Americans do online and watch on TV.

1 Majority of employees don’t want to return to pre-Covid working patterns
2 Homeworking is depriving me of juicy gossip
3 Investors in Irish solar energy fund in line for €20m payout
4 Tobacco giant’s menthol-ban substitutes take 5% share of Irish market
5 If tourists are such pariahs should we not be testing them on arrival?
6 Construction activity rebounds as sites re-open
7 Varadkar and Donohoe to meet banks to discuss mortgage breaks
8 Norwegian airline sued in Dublin by inflight caterer
9 ‘My rent here is so low it’s a joke’
10 BT warns that banning Huawei too fast could cause outages
Real news has value SUBSCRIBE

BT warns that banning Huawei too fast could cause outages 09:05
Construction activity rebounds as sites re-open 08:54
Cigarette sales, Leo to meet the banks, and Arclight’s €20m payout 06:52
Government should set a benchmark for any permanent increases in spending 05:50
Norwegian airline sued in Dublin by inflight caterer 05:37
Search executive
jobs on irishtimes.com