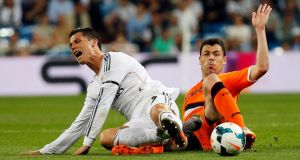 The ratings-magnet that is the Uefa Champions League football tournament draws to a close this Saturday, as Real Madrid play Atlético Madrid in the final. RTÉ Two’s coverage of the match had a published spot price of €12,000 for a 30-second ad, which in May was second only to the Eurovision final (which had a published price of €13,000).

Ratings for the competition, for which RTÉ and TV3 share the Irish rights, may be dented next season in the absence of Manchester United from the competition for the first time since 1995.

However, it is the 2015-2016 season and beyond that will really be of concern to the two broadcasters. Uefa will bring three- year Irish rights to the Champions League from 2015-2016 to 2017-2018 to tender at the beginning of the next year.

“I’d have thought it would be a good contest,” says TV3’s director of broadcast (and former RTÉ head of sport) Niall Cogley of the next rights round.

The television rights to the Champions League have already been the subject of upheaval in the UK. The rights up until 2015- 2016 are shared by BSkyB and free-to-air ITV.

Meanwhile, RTÉ’s offer to advertisers of “cooling break” commercials during this summer’s World Cup matches, at a cost of €6,250 per 30-second spot, is now sold out.

Collison brothers worth an estimated €2.9bn each 16:21
How can the State support me now I’ve lost my job? 16:16
WeWork sues SoftBank after $3bn tender offer falls through 15:22
EU finance ministers hope to thrash out Covid-19 recovery plan 15:20
Wall Street jumps at the open as European and Asian shares rally 14:50
Search executive
jobs on irishtimes.com