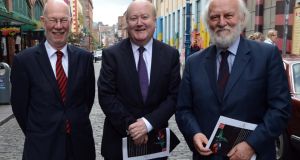 The Government should consider an Irish equivalent of France’s agreement with Google to set up a €60 million fund to assist the French newspaper sector, according to Conor Brady, former member of the Garda Ombudsman Commission and former editor of The Irish Times.

“I would urge the current Minister [for Communications], Pat Rabbitte, to consider some such initiative,” Mr Brady said at the launch of the annual report of the Press Council of Ireland and the Office of the Press Ombudsman.

The French government signed the deal with Google in February after months of talks, during which newspaper and magazine publishers pushed for Google to pay them licensing fees for listing headlines and article snippets in its search engine results. The technology giant fended off demands that it pay for the right to link to content, but agreed to pay into a fund to help publishers develop their digital businesses.

Addressing an audience that included national newspaper editors, Mr Brady, who was guest of honour at today’s launch, also said that newspapers should take a “fresh look” at sponsored content and further explore opportunities for funding from philanthropic sources.

“Our democracy will be impoverished if news media are so reduced in their fortunes that they cannot actually report the news,” he said.

As newspaper companies struggled to find a new business model in the online age, dwindling revenues were forcing many of them to make self-defeating cuts, Mr Brady warned.

“There are fewer journalists and they’re working longer hours, discharging more tasks and spreading themselves across a wider range of duties than ever before. Not only this; many of them are being poorly paid; there are very few new entrants now with the security of staff jobs,” he said.

“I don’t think good journalism can flourish if those who seek to make a career of it cannot be reasonably well-provided for - as well-provided for, for example, as a teacher or a civil servant or a guard.”

Complaints to the Office of the Press Ombudsman rose substantially to 575 in 2012, but most complaints were either not pursued or were resolved between the complainant and the newspaper before the Ombudsman made a ruling.

Some 273 of the initial 575 complaints related to just two articles. The first was an article in the Irish Independent in February 2012 that inaccurately translated an interview given to a Polish newspaper by a Polish woman living on welfare payments in Ireland. It received 161 complaints, but none were formally pursued. Mr Horgan said there had been “a prompt response” by the newspaper to correct its article and this illustrated how internal complaints-handling systems were working.

A March 2012 comment piece in the Irish Independent by its former columnist Kevin Myers on the subject of gay marriages received 112 initial complaints. Four formal complaints were lodged, and Mr Horgan subsequently upheld them on the grounds of prejudice and failure to distinguish fact from comment. Mr Myers now writes for The Sunday Times.

The number of complaints lodged in 2012 was substantially higher than in previous years due to such multiple complaints. “This indicates that the existence of my office provides members of the public with an important outlet for their criticisms of the press even if, on reflection, many of them decide not to pursue the matter further,” Mr Horgan said.

The proportion of cases resolved by conciliation or mediation suggests that the complaints system has “bedded down well”, he suggested.