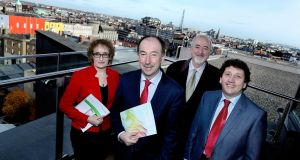 The Broadcasting Authority of Ireland (BAI) has promised to step up its efforts to help Irish broadcasters stay in business, putting “sectoral sustainability” at the heart of its strategy statement for the first time.

The move follows the BAI’s conversations with broadcasters about the financial squeeze facing the industry – as advertising revenues migrate to online giants such as Facebook.

Prof Pauric Travers, chairman of the BAI, said sustainability had always been a concern of the authority but it was highlighting it now as “an issue that really has to be addressed”.

Prof Travers said he hoped the Government would make a “timely intervention” to alleviate the concerns of Irish broadcasters and not “let it fester” or wait for a wave of company closures.

This will take place as part of the organisation’s work plan for the next few years.

The broadcasting regulator could yet become involved in the proposed Independent News & Media takeover of Celtic Media Group’s newspapers – if it is nominated to consider the plurality implications of the acquisition by Minister for Communications Denis Naughten, despite the fact that the deal involves two print groups.

A survey of industry participants indicated the BAI “is not particularly visible in leading the debate on plurality”, said Karen Hall, account director at research firm Ipsos MRBI.

The BAI has launched a new draft strategy statement and opened it up to a public consultation, with a deadline of December 1st for submissions.

Newstalk chief executive Tim Collins said he was “very encouraged” by the BAI’s comments on sustainable funding models and by its response to a presentation by the Independent Broadcasters of Ireland (IBI) group, which represents the non-RTÉ radio sector.

“Unless the authority becomes involved in this, we’re not going to move it on very far,” he said.

The IBI has campaigned for public funding for independent radio stations for several years, and had hoped that additional revenues generated from the proposed household broadcasting charge could be diverted in the direction of its members.

RTÉ also lobbied for the introduction of the charge, which would have replaced the television licence fee – believing it could deliver more security on its future funding.

However, the planned charge was deferred by former minister for communications Pat Rabbitte in 2014, due to the fragile political climate and it has remained off the agenda of successive ministers.

Radio advertising revenues are on track to fall across the market as a whole in 2016, although some stations have seen growth.

Recent figures from industry body IAB Ireland pointed to a 33 per cent rise in digital ad revenues in the first half of 2016 compared to the same period in 2015, as more advertisers flock to Facebook.

Meanwhile, the latest Joint National Listenership Research (JNLR) figures show that music stations aimed at younger listeners are struggling to maintain their audiences amid the rake of digital competition.

Dublin alternative music station TXFM saw a small uptick in its listenership tally in its final months, but the station – previously known as Phantom – had been loss-making for years before finally going off-air last week.

1 How I managed to cut my mobile phone bill by at least a half
2 Son putting elderly dad under pressure to sign over land
3 Fiona Reddan: Who’s afraid of Revolut? Not AIB and BOI it seems
4 Lahinch Golf Club runs out of its own cash after €3m Covid-19 hit
5 State may face €1 billion in compensation in Covid-19 case, Press Up group claims
6 Ryanair warns of further cuts, Stripe to raise more funds, and AI for cows’ faces
7 UK executives rush to sell shares over capital gains tax fears
8 Smarter ways to heat your home: Eight of the best modern systems
9 UK faces economic emergency with 2.6m jobless, says chancellor
10 Is Coveney the right man to lead Greencore out of the Covid-19 crisis?
Real news has value SUBSCRIBE

Is Coveney the right man to lead Greencore out of the Covid-19 crisis? 06:00
State may face €1 billion in compensation in Covid-19 case, Press Up group claims 06:00
Keep an eye on your heart with the Withings BPM Core 05:44
Take gaming to a new level this Christmas 05:43
iPhone 12 Pro Max review: A must-have if you like big phones 05:43
Search executive
jobs on irishtimes.com