Ads at Sydney stations to yield dollars for APN 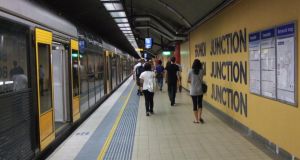 From Circular Quay to Bondi Junction, Sydney’s network of train stations is set to bring in the dollars for APN News & Media, the Australasian group in which Independent News & Media (INM) holds an 18.6 per cent stake and in which Denis O’Brien now holds an 12.23 per cent stake.

It still has a 50 per cent stake in transport sector advertiser Adshel, and in December, both Adshel and APN Outdoor won major five-year contracts for the largest roll-out of digital infrastructure in the Sydney outdoor market.

The city’s train operator Sydney Trains is planning an overhaul of advertising on the network, with up to 150 new digital screens to be added to the concourse precincts at key central business district railway stations, including Wynyard, Town Hall and Central, and across the suburban rail network.

On publishing its full-year results yesterday, APN said that after a “significant” investment in year one, the returns would flow in to Adshel from the second year of the contract. Adshel enjoyed revenues of A$149 million last year.

The advertising contracts, shared between four companies, are expected to double the revenue Sydney Trains receives through advertising to at least $100 million over five years.

The industry argues that the upgrade of old billboard sites to digital screens improves the look of city street architecture, while digital panels also have the advantage of being able to double as public information screens.

New South Wales authorities have even promised to spend the cash they earn on “improvements to services for customers”.