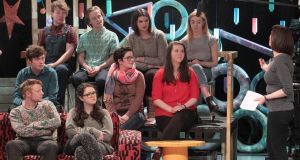 Religion is a power for good in the world. All drugs should be legalised. Men can’t be feminists. And it’s not possible to have a world-class education system without entrance fees. Discuss.

For four consecutive evenings from Tuesday, March 3rd, a television set full of students will be doing just that as TV3’s sister channel 3e plays host to Debate Week.

Presented by TV3 news anchor Colette Fitzpatrick, debates tackling these motions will be filmed at the National Film School at the Dún Laoghaire Institute of Art Design and Technology (IADT) and will be produced largely by students from IADT in a joint initiative between 3e and the institute.

Students from IADT’s BA in Design for Stage and Screen degree presented set designs to 3e and contributed to the build of the chosen design, while students from the BA in Film and Television Production programme contributed to filming and production.

Students from the National Film School, the institute’s students’ union and its debate society are also involved. Conor Tiernan, a senior producer in TV3’s news documentary unit, says TV3 professionals had provided supervision, but the students operated all the cameras, sound and studio equipment.

“It has resulted in them producing work of a very high standard which will be broadcast on national television in prime time. There is no better experience,” he says.

The Debate Week programmes, which will be broadcast at 9pm, mark a departure for 3e, which does not often depart from a schedule of acquired entertainment shows and repeats of TV3 content.

However, the channel is an important asset for TV3 Group, which acquired it in 2008 (as Channel 6) for €10 million.

It has been quietly adding more than 2 per cent to the group’s share of viewing for some years now.

In January 2015, its share of adult 15-plus viewers rose to 2.9 per cent, up from 2.1 per cent a year earlier, while its share of 15-44 year-olds exceeds 3 per cent. Last year, the group began scheduling Ultimate Fighting Championship (UFC) events to which it had the rights on 3e and they have delivered its highest audiences to date.

TV3 now hopes that this series of student debates will also help promote 3e to its core demographic: young people who might otherwise be watching E4, or no channel at all.