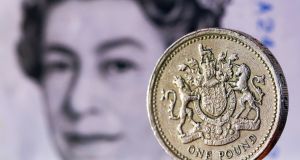 The pound fell the most since 2009 after London Mayor Boris Johnson, one of the UK’s most popular politicians, said he’ll campaign for Britain to leave the European Union in a June referendum. (Photograph: Chris Ratcliffe/Bloomberg)

The pound fell the most since March 2009 after London Mayor Boris Johnson, one of the UK’s most popular politicians, said he’ll campaign for Britain to leave the European Union in a June referendum.

Sterling dropped at least 1.2 per cent against all its 16 major peers, reversing a gain made on Friday when Prime Minister David Cameron secured a deal on membership terms with EU leaders in Brussels. The next day, Cameron said he would fight to keep Britain in the bloc, and set a June 23 date for the vote. Gauges of pound volatility versus both the dollar and euro surged to the highest levels since 2011 as Conservative MP Johnson’s backing of a so-called ‘Brexit’ pitted him against the prime minister.

“The pound is tumbling after the deal clinched by Prime Minister Cameron at the EU summit failed to alleviate fears about Brexit,” said Valentin Marinov, head of Group-of-10 currency strategy at Credit Agricole SA’s corporate and investment-banking unit in London. “The fact that prominent members of the Conservative Party announced they will campaign for Britain to leave the EU likely underscored investors’ concerns that Brexit risks could increase from here despite the deal.”

Sterling weakened 1.2 per cent to 78.21 pence per euro. Although the announcement of the date removes one aspect of ambiguity for traders, they now face months of polls and campaigning that may boost volatility further. With traders already pushing back bets on the timing of a Bank of England interest-rate increase, the prospect of Britain leaving the world’s largest single market had been causing further concern, helping push down the pound against all of its Group-of-10 peers this year. The options market signaled more losses ahead for the pound. The premium for options protecting against a decline in the pound versus the dollar, compared to those insuring against an increase, were the most since 2010, according to six-month risk-reversals.

“The pound’s weakness is a product of uncertainty of the UK’s ongoing membership of the union, not the timing of the poll,” said David Page, a senior economist at AXA Investment Managers in London. “Weakness is likely to reflect any increased perception of the likelihood to leave and as such is likely to be a constant feature over the coming months.”

Cameron is due to address lawmakers later Monday. Economists at HSBC Holdings Plc, Britain’s largest bank, said the make up of the UK could be called into question if it votes to leave the EU but Scotland or Wales want to stay.

Moody’s Investors Service said a Brexit would be negative for the nation’s credit rating, as the economic costs would outweigh any benefits.

“We consider it positive that the referendum will take place as soon as June, as a lengthy period of uncertainty on the part of firms and investors would damage the UK’s economic growth prospects. That said, the outcome of the referendum remains wide open. In our view, a decision to leave the EU would be credit negative for the UK economy,” says Kathrin Muehlbronner, a senior vice president at Moody’s.

HSBC said in January a forecast for a jump to $1.60 by year-end relied on the nation remaining in the 28- member group.

Not all UK assets are suffering from the uncertainty of the referendum. The FTSE 100 Index of stocks climbed 1.3 per cent on Monday. While JPMorgan Chase and Co. says an exit would be “quite negative” for the market, it doesn’t expect it to leave. The bank just turned overweight British equities after being underweight for three years, citing attractive valuations and a lower commodity exposure. Meanwhile UK 10-year government bonds outperformed US Treasuries, declining for the first time in three days.

Boris Johnson isn’t the only dissenter. Six ministers said they’d defy Cameron and campaign to leave on Saturday, among them the Prime Minister’s long-time friend and ally, Justice Secretary Michael Gove. Even so, Cameron has convinced the majority of his cabinet to support him, including Business Secretary Sajid Javid and Home Secretary Theresa May, who were both seen as wavering over which way to vote. “Even if an exit isn’t likely, uncertainty and concerns about it will continue and weigh on sterling,” said Kengo Suzuki, chief currency strategist at Mizuho Securities Co. in Tokyo. “On the economic front, there isn’t much to undermine the currency, but the uncertainty over a potential exit will cap sterling, keeping it in a $1.40 to $1.50 range.