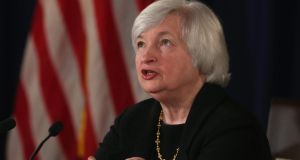 US Federal Reserve chairwoman Janet Yellen during her monthly news conference yesterday in Washington, DC. US stocks advanced yesterday, sending the S&P 500 Index above a record closing level, after the Fed pledged to keep borrowing costs low for a “considerable time” after its asset-purchase programme ends. Photograph: Mark Wilson/Getty Images

A majority of Bank of England policy makers favour maintaining the status quo over an interest rate hike.

The European Central Bank is continuing with its stimulus programme, while the People’s Bank of China has joined the others and pumped $81 billion into the far eastern country’s biggest finance institutions.

In the US, meanwhile, stocks strengthened after the Federal Reserve said it would keep rates low for a “considerable time” after its asset-purchase programme ends.

Index heavyweight, international building materials giant CRH, added 1.13 per cent to close at €17.95 as investors bought close to 2.25 million shares in Dublin and a similar number in London. Traders said its sector was popular across Europe yesterday with the likes of Lafarge and Holcim also putting in decent performances. They pointed out that it had endured a weak period in recent days.

Ryanair slipped slightly, shedding 0.81 per cent to finish at €7.33. Market watchers suggested that sentiment yesterday favoured national carriers such as BA and Air France, but they also pointed out that the Irish company had had a good recent run.

DS Smith gained 5.1 per cent to 286.9 pence. Corrugated-box volumes improved in all regions in the months since May 1st, with growth ahead of the same period last year, the maker of recycled packaging said in a statement.

Daily Mail dropped 6.7 per cent to 760 pence. The postponement of RMS One will result in a “material impairment” to the value of the asset this year, while operating costs will increase by about £5 million.

Airline Easyjet inched up, gaining 0.22 per cent to 1,338p. Traders suggested that investors were leaning more towards flag carriers than low- cost airlines.

Air France rose 3.6 per cent to €8.28 after falling 7.5 per cent in the past three days. Prime minister Manuel Valls on France Inter radio asked pilots to end a strike that has forced the carrier’s French unit to cancel more than half its flights this week.

Ebro Foods added 2.3 per cent to €15.39 as UBS raised its rating on the Spanish maker of rice and pasta products to buy from neutral. The shares had lost 12 per cent so far this year through yesterday.

Richemont declined 4.1 per cent to 84 Swiss francs after the maker of Cartier jewellery and Montblanc pens said five- month sales climbed 4 per cent at constant exchange rates, less than the 6 per cent growth projected by analysts. Swatch Group lost 2.1 per cent to 477.60 francs.

US stocks advanced, sending the S&P 500 Index above a record closing level, after the Federal Reserve pledged to keep borrowing costs low for a “considerable time” after its asset-purchase programme ends.

Financial, commodity and industrial shares led gains in nine of the 10 main industry groups in the Standard and Poor’s 500.

FedEx and Lennar rallied more than 3 per cent after posting earnings that topped analysts’ estimates.

Auxilium Pharmaceuticals jumped 43 per cent, the most ever, after getting a takeover bid. – Additional reporting: Bloomberg, Reuters