Gains for Whitbread, Bankia and Time Warner, but Paddy Power and Intel retreat 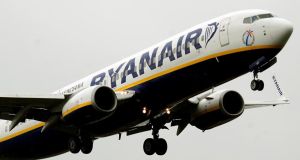 Ryanair rose 1 per cent to €5.73 following its announcement on Thursday of 12 new routes out of Stansted

Most European stocks advanced as German business confidence rose to the highest level since April 2012, supporting the view that economic growth will increase going into the new year.

Investors also weighed up the implications of comments by European Central Bank officials after ECB governing council member Peter Praet said Europe had a debt overhang problem that needed to be addressed “forcefully”.

Meanwhile, job openings in the US climbed to a five-year high in September, indicating employers were confident about demand before the federal government shutdown.

DUBLIN
The Iseq gained 0.2 per cent, mirroring similar fractional gains across Europe. Ryanair rose 1 per cent to €5.73 following its announcement on Thursday of 12 new routes out of Stansted, but there was a 2.1 per cent slip for Aer Lingus, which closed the session at €1.32.

Bookmaker Paddy Power lost 4.1 per cent to €55 after market analysts at Citigroup took it off its list of most-preferred stocks, replacing it with rival William Hill.

Independent News & Media continued to advance, adding 6.4 per cent to finish at 15 cent.

The company issued the prospectus for its upcoming capital raising on Thursday.

LONDON
The FTSE 100 of blue-chip shares slid 0.1 per cent, going against the cautiously upward trend on the other major European markets.

Daily Mail climbed 3.5 per cent to 893 pence, its highest price since January 2001, after analysts at Barclays upgraded the stock to equal weight from underweight.

Whitbread climbed 3 per cent to 3,483 pence. JPMorgan Chase raised its recommendation on the owner of Premier Inn budget hotels and the Costa Coffee chain to overweight from neutral, citing the economic rebound in the UK.

EUROPE
National benchmarks rose in 13 of the 18 western European markets, with Germany’s Dax gaining 0.3 per cent and France’s CAC 40 advancing 0.6 per cent.

Spanish lender Bankia jumped 5.8 per cent to 95.6 euro cents after chairman Jose Ignacio Goirigolzarri said he does not sense the government has “any rush at all” to sell its stake in the lender.

Suedzucker, which makes sugar, starch and bakery additives, retreated 7.9 per cent to €19.15 after the shares were downgraded to reduce from buy by Commerzbank.

German healthcare group Rhoen-Klinikum fell 3.3 per cent after saying its second biggest shareholder sued to block the sale of 43 clinics to Fresenius’s Helios unit. In September Helios agreed to pay Rhoen-Klinikum €3.07 billion for the clinics.

US
Stocks rose in early US trading , putting the Standard and Poor’s 500 index on track for a seventh weekly advance, after the pace of hiring increased and pharmaceutical companies rallied on favourable decisions by European regulators.

Time Warner Cable surged 7.6 per cent to $129.99 on renewed takeover speculation. Comcast is considering a bid for the company, a deal that would unify the largest cable providers in the US, Bloomberg reported.

United Continental Holdings, the world’s biggest airline, climbed 3.1 per cent to $38.24 after billionaire David Tepper said his “big play in the market” is airlines.

Intel lost 5.2 per cent to $23.92. The world’s largest maker of semiconductors said revenue would be approximately unchanged in 2014. – (Additional reporting: Bloomberg)

Providence to raise $3m as deal over key asset progresses 07:28
Tesla engineers show ventilator prototype on YouTube 06:46
Construction delays ahead, legal issues with pay cuts and some Covid perspective 06:30
Major building projects could be delayed two years after Covid crisis 05:30
What does the ECB’s doing ‘everything necessary’ policy mean for you? 05:12