Stock markets wake up to another Greek hangover 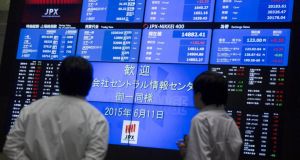 Top Greek shares lurched lower on Friday, falling 4 per cent in the wake of IMF negotiators’ withdrawal from Greek debt talks in Brussels.

The volatile Athens ATG index index, which had surged more than 8 per cent on Thursday on hopes of a compromise deal, was down 4 per cent this morning. Bank shares were the worst hit: Alpha Bank, Bank of Piraeus and Attica Bank were down 7.9 to 10 per cent.

European stock markets as a whole woke up to a Greek hangover on Friday, with the latest twists and turns of debt negotiations keeping investor confidence in check despite market views that a compromise will be reached.

The aerospace sector was also a drag on markets ahead of the Paris Air Show next week, with Zodiac Aerospace shares slumping 5 per cent after a profit warning linked to seat manufacturing delays.

Airbus Group was down 1 per cent after its chief was cited as confirming 2015 goals. European equities are nevertheless on track for their first weekly gain in three weeks as investors bet a recent bond-driven sell-off had gone too far.

Weekly inflows into European equities remained in positive territory, according to broker data. The pan-European FTSEurofirst 300 index was 0.2 per cent lower this morning, with most major benchmark indexes in the red. Greece’s ATG share index was 0.6 per cent lower.

European stocks had already lost some of their gains in late trading on Thursday after the International Monetary Fund announced that its delegation had left negotiations over Greece in Brussels and flown home because of major differences with Athens.

The state of the US economy balanced somewhat the fears around Greece, traders said, following retail sales data that lifted the outlook for consumer spending. “The fallout of the setback where Greece is concerned has been limited by the release of solid U.S. economic data pointing towards a strong rebound in economic growth,” said Markus Huber, trader at Peregrine & Black.

Alstom shares gained 1.6 per cent after the company said reports of a statement of objections from the European Commission regarding its deal with GE did not prejudge the outcome of the inquiry into the tie-up. Alstom said it would continue to provide evidence on the possible impact of the deal.

At a time when a revival in mergers and acquisitions is buoying global equities, not all companies are promoting deal-making: German ATM maker Wincor Nixdorf fell 2.7 per cent after its chief told a German newspaper he was not interested in the company being bought. Meanwhile, UK clothing brand Ted Baker rose 1.6 per cent after it reported a rise in first-quarter revenues.

1 Election 2020: Parties' pledges on housing simply don’t add up
2 First-time buyers drive growth in mortgage values and volumes
3 Britain after Brexit will not be alone, but it will be lonelier
4 Marlet snaps up 1.8 acre Sandyford site for €17m
5 Housebuilder Glenveagh to build 2,650 more homes than planned
6 Ryanair accepts four-year labour agreement with Irish pilots
7 Coronavirus shuts down Starbucks, Toyota and BA
8 Banks withdrawing from ATMs – another failure of regulation
9 Fair Deal nursing homecare leaves little for bills and gifts
10 Getting out from under ‘never-ending’ Celtic Tiger debt burden
Real news has value SUBSCRIBE