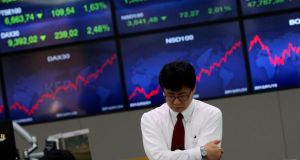 A South Koren dealer works in front of monitors at the Exchange Bank in Seoul, South Korea. Photograph. Jeon Heon-Kyun/EPA

Concerns about China’s economic slowdown and its shadow banking sector, combined with expectations that the US Federal Reserve will scale back its bond buying further, have put pressure on emerging markets dependent on external financing.

Political risks in Ukraine, Turkey and Thailand, as well as a looming financial crisis in Argentina, are compounding the problem of emerging markets in a week when the Fed is expected to cut its monthly bond purchases by another $10 billion.

The Turkish lira edged back from record lows, however, after the central bank announced an emergency policy meeting, raising market hopes that it would ignore political pressure and implement a decisive rate hike to protect its currency.

On Wall Street, strong earnings from Caterpillar were the focus at the open, but a bounce higher was more than offset by weaker-than-expected December home sales data. “Earnings gave investors hope but the reality of all the moving parts of emerging markets and weak home sales made them rethink how good results from a handful of companies really are,” said Kim Forrest, senior equity research analyst at Fort Pitt Capital Group in Pittsburgh. She said investor concern highlighted the complexity of global markets. “This is a clockwork mechanism and when the tiniest thing goes wrong, the clock stops working; it’s not well understood, and it has all these unintended consequences.”

The FTSEurofirst 300 index of top European stocks was also down 0.8 percent. China’s shadow banking sector, a key source of financing for local corporations, was under the spotlight.

A Chinese trust firm said it had reached an agreement to resolve a troubled high-yield investment product, just days away from what could have been a precedent-setting default in China’s shadow banking system.

Emerging markets experienced a similar synchronised sell-off last May when the Fed initially suggested a wind-down to its stimulus. But this time, local factors are playing a bigger role. “The question is one of contagion and risks, and that’s what we’re living through at the moment. You can see the source of the problem is not somewhere else but directly in emerging markets. That’s really worrying the market,” said David Bloom, head of currency strategy at HSBC.

The Turkish lira, which has been leading the rout in emerging currencies amid a corruption scandal that has rocked prime minister Tayyip Erdogan’s government, hit a record low of 2.39 to the dollar before regaining some ground after the central bank said it would hold an emergency meeting tomorrow.