Over 100 fraudsters arrested in international crackdown 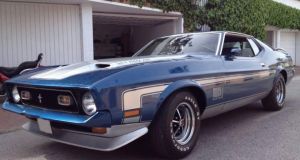 A Mustang seized by police, as officers from City of London Police joined Spanish counterparts from the Policia Nacional in a series of dramatic raids in Barcelona, Madrid, Marbella and London this week, in one of the biggest anti-fraud operations ever staged. Photograph: Anthony Devlin/PA Wire

Criminal kingpins who robbed victims of millions of euro in savings to spend on their playboy lifestyles have been targeted in an unprecedented international crackdown.

Officers from City of London Police joined Spanish counterparts from the Policia Nacional in a series of dramatic raids in Barcelona, Madrid, Marbella and London this week, in one of the biggest anti-fraud operations ever staged.

Details of the crackdown, which also saw arrests in the US and Serbia, can now be reported after a reporting ban was lifted by a Spanish judge.

A total of 110 fraudsters were held as police moved to stamp out so-called boiler room fraud, where investors are duped into buying worthless or non-existent shares.

Investigators targeted a number of organised crime gangs, aiming to take out the top levels of the networks as well as dozens of the conmen who work for them.

Officers’ likened their lifestyles to the excesses portrayed by Leonardo DiCaprio in Wolf of Wall Street, spending the stolen money on sports cars, designer watches, drugs and prostitutes.

One of the suspects was believed to be paying £40,000 (€48,500) per month just to rent an apartment. An Aston Martin and Ferrari were among the cars seized by police, along with various watches and £500,000 in cash.

Speaking near the site of one of the searches in Barcelona on Tuesday, City of London Police Commander Steve Head, said: “What we’ve seen today is the culmination of a two year investigation that has been worldwide in its nature. What we’ve seen is an unprecedented level of co-operation.

“We expect this network alone to have upwards of 1,000 victims. We’ve seen millions of pounds taken from people.

“You see real victims in real communities whose lives have been devastated. Savings that they thought they could rely on in their old age have gone in a heartbeat.”

In total, the international team executed 35 warrants on offices used to run the fraud, and the criminals’ lavish homes.

So far 850 UK victims of the gangs have been identified, mainly pensioners, who have lost a total of around £15 million — ranging from around £2,000 up to £500,000 per person — but police believe that this is “the tip of the iceberg” and that there are thousands of people who have been duped.

One of the victims took their own life after being defrauded.

Mr Head added: “These people have no conscience in terms of what they do to people’s lives. This is not at all a victimless crime. We’ve seen lives that have been utterly devastated.

“We have dismantled an international network of fraudsters. Make no mistake, this will make a difference to the ability of fraudsters to operate at this level.

“This network has been dismantled, hopefully we have sent a message to those who think that it’s an easy crime that it doesn’t matter where you are, we will come after you.”

As well as the investment scams the gangs are involved in drug dealing, money laundering and gun crime, and use their ill-gotten profits to hire prostitutes.

City of London Police has spent two years looking at the top levels of the fraud gangs, and aimed to take out key figures such as lawyers, money launderers and financiers.

Around 40 officers from the force travelled to Spain for the operation, staged along with around 300 of their Spanish counterparts.

Most of the suspects they were targeting are British, and a core group are expected to be extradited back to the UK to face trial.

Commissioner Jose Luis Andre Vega from the Spanish national police, said: “This sort of crime knows no frontiers or boundaries. It’s important to investigate this sort of organised crime on an international level.”

It is one of the biggest ever police operations to crack down on fraud, and also involved the UK National Crime Agency, Financial Conduct Authority and Serious Fraud Office.

Mr Head added: “In terms of economic crime and fraud this is one of the biggest operations there has ever been. The kind of co-operation we’ve seen has never been seen before in terms of going after international fraudsters.

“That’s a really important message to go out there to those international fraudsters who think they can act with impunity. We have shown that we can work together with law enforcement teams across the world to go after these people.”

Of the 110 arrests, there were 84 in Spain, 20 in the UK, two in the United States and four in Serbia, with most of the suspects arrested on suspicion of money laundering and fraud offences.

The operation closed down 14 boiler rooms in Spain, two in the UK and one in Serbia.

1 Who are Ireland’s 17 billionaires?
2 My father in a nursing home wants to gift me his house
3 Are there annual limits on inheritances or gifts to a child?
4 The entrepreneur who went from ‘total poverty’ to a Lamborghini
5 State subsidises public sector retirees to cover gap until State pension
6 Swiss police suspect Davos plumbers of being Russian spies
7 Davos Diary: Chilly reception for Trump’s ‘prophets of doom’ speech
8 Pretax profits decline sharply at Tuam-based car tech firm
9 Aunt has bequeathed a house intended for my son to me
10 Q&A: Why has the pension age question suddenly become an election issue?
Real news has value SUBSCRIBE