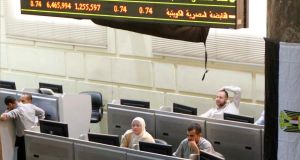 Traders work at Egypt’s Stock Exchange in Cairo yesterday.Oil slipped today from a two-week high above $106 a barrel after Egypt’s armed forces toppled its president, easing concerns over the threat of supply disruption in the Middle East. Photograph: Mohamed Abd El Ghany/Reuters.

Oil slipped today from a two-week high above $106 a barrel after Egypt’s armed forces toppled its president, easing concerns over the threat of supply disruption in the Middle East.

The risk that turmoil in Egypt could destabilise the Middle East as well as a tightening in the US oil market had sent prices higher this week. But the Suez Canal, a vital waterway for oil shipments, was not affected by the unrest.

“It is too early to say that the situation has calmed down, but the safe operation of the Suez, which is in the interest of both Persian Gulf countries and oil-consuming nations, seems to be guaranteed,” Tamas Varga, an analyst at oil brokers PVM, said.

The premium of Brent to US crude was just above $4.30 after having fallen sharply to reach $3.09, its narrowest since December 2010, yesterday.

The US benchmark also received a boost when a weekly inventory report showed stockpiles fell by more than 10 million barrels, the biggest drop for the time of year since 2000.

Following the removal of Mohamed Morsi, Cairo’s benchmark dipped 0.3 per cent, slipping off a three-week high and extending 2013 losses to 9 per cent.

Bourse data showed that foreign investors were sellers but Egyptians remained net buyers on hopes the military intervention would put an end to the Islamist president’s rule.