Iseq makes modest gains with Glanbia, Dalata and CPL Resources all up 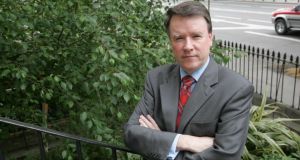 Dalata, the hotel company run by former Jurys chief executive Pat McCann (above), rose 1.61 per cent to €3.15. It was among six potential bidders named by ‘The Irish Times’ yesterday as being in the running for the €400 million Moran’s hotel group. Photograph: Brenda Fitzsimons

The UK’s top shares rose for the first time in six sessions yesterday, helped by companies with exposure to Scotland, after another poll showed a majority would vote against independence next week.

Dalata, the hotel company run by former Jurys chief executive Pat McCann, rose 1.61 per cent to €3.15. It was among six potential bidders named by The Irish Times yesterday as being in the running for the €400 million Moran’s hotel group.

CPL Resources, Anne Heraty’s recruitment company, is in favour as the Irish economy improves and unemploymeny continues to fall. It rose 2.21 per cent to close the day at €6.95 per share.

Whitbread was among the top losers on the FTSE 100, down 1.9 per cent, as UBS downgraded the owner of Premier Inn hotels and Costa Coffee to “sell” from “neutral”.

Among mid-caps, Aveva Group, whose software is used to design power plants, shipping and oil and gas facilities, tumbled about 25 per cent as it warned about a £14 million hit to its first-half revenue from currency moves and the phasing of some rental renewals.

Lagardere added 3.9 per cent to €21.35 after HSBC Holding upgraded the media company to overweight, the equivalent of a buy recommendation, citing recent stock declines. Lagardere is down 32 per cent since this year’s high in May.

Yahoo rose 3 per cent to $42.49 after Alibaba received enough demand for its IPO for it to say it plans to stop taking orders. Yahoo is set to get an $8 billion windfall from the flotation. Alibaba plans to set a final price for the shares on Thursday.

Conversant, which helps companies target users with internet ads based on their online searches, soared 30 per cent to $34.80. Alliance Data agreed to buy the company for $2.3 billion, or $35 a share, according to a statement.

Hertz advanced 0.8 per cent to $27.97 after the rental-car company agreed to replace three directors with Carl Icahn associates. In return, the billionaire investor agreed not to seek board representation and to vote in favour of company nominees at Hertz’s 2015 AGM.