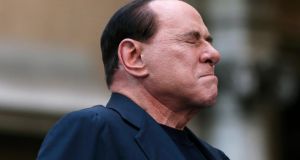 Former Italian Prime Minister Silvio Berlusconi: Italian equities dropped, with the country’s banks among the biggest fallers, while bond yields rose after members of Silvio Berlusconi’s centre-right party warned they would bring down the government if the former prime minister is expelled from parliament over a recent conviction. Photograph: Reuters/Alessandro Bianchi

European stocks fell for the first time in three days amid political wrangling in Italy. Italian equities dropped, with the country’s banks among the biggest fallers, while bond yields rose after members of Silvio Berlusconi’s centre-right party warned they would bring down the government if the former prime minister is expelled from parliament over a recent conviction. Investors were rattled by the threat of a new government crisis, which could delay efforts to revive the economy.

Trading volumes across Europe were substantially lower than average, however, as markets in London were closed for a bank holiday.

DUBLIN
The lack of FTSE action resulted in a subdued day for the Iseq, which closed flat.

Insulation-maker Kingspan was one of the few to make a significant gain, with the stock rising 5.2 per cent to €11.95, ahead of its ex-dividend date tomorrow.

Bookmaker Paddy Power, which publishes its interim results tomorrow, fell 0.4 per cent to €61.50. A note from analysts at Davy Research reiterated its “underperform” rating, concluding that they do not believe the stock’s current valuation “fully reflects the competitive and tax-related headwinds facing the group over the medium term”.

EUROPE
National benchmark indexes declined in 13 of the 17 western European markets open today. France’s CAC 40 slipped 0.1 per cent, and Germany’s DAX climbed 0.2 per cent, but the main story of the day was on Italy’s FTSE MIB Index.

Mediaset, the broadcaster controlled by Berlusconi, tumbled 6.3 per cent to €3.15.

Fiat Industrial, the maker of commercial and agriculture vehicles spun off from Fiat in 2011, slipped 1.7 per cent to €9.49 after saying chief financial officer Pablo Di Si resigned to pursue other interests.

KPN added 3 per cent to €2.33 after Telefonica Deutschland said billionaire Carlos Slim’s America Movil has committed to vote in favour of the sale of the German mobile business, called E-Plus.

Telefonica Deutschland, controlled by Spain’s largest phone company and owner of the O2 brand in Germany, climbed 2.9 per cent to €5.22.

Sanofi rose 2.3 per cent to €76.65, for the biggest gain in the Stoxx 600 by index points. France’s largest drugmaker said tests showed superior benefits of its Fluzone High-Dose influenza vaccine relative to the standard dose of Fluzone treatment in preventing flu.

The Stoxx 600 Health-Care Index climbed 0.4 per cent for the best performance among 19 industry groups in the Stoxx 600 after US company Amgen agreed to buy Onyx Pharmaceuticals in a $10.4 billion transaction.

US
Stocks rose in New York, as investors speculated whether a report showing durable-goods orders fell in July would delay stimulus cuts.

Amgen jumped 9.6 per cent to a record $115 in early trading after agreeing to buy cancer- treatment developer Onyx Pharmaceuticals in a $10.4 billion transaction.

Facebook advanced 2.3 per cent to $41.67 as the world’s largest social network’s market value exceeded $100 billion. The stock has more than doubled since falling to a record low of $17.73 in September.

Tyson Foods, the largest US meat processor, fell 6.8 per cent to $29.33 after Bank of America analysts cut their rating on the stock.