Investors place their trust in central banks to fight slowdown 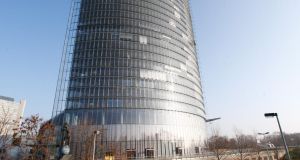 The Deutsche Post headquarters in Bonn, Germany. Deutsche Post shares rose 3.3 per cent for the largest gain on the German market

Mining stocks were the best performers, rising on speculation that weak manufacturing data might prompt Beijing to prop up economic growth in the world’s biggest metals consumer.

European stocks were buoyed after ECB governing council member Jens Weidmann said it was not ruling out buying loans and other assets from banks.


DUBLIN
Datalex , a travel software company backed by Dermot Desmond, was one of the star performers on the Iseq yesterday. The company announced it is to pay its first ever dividend after sales rose 18 per cent. The stock closed at €1.37, up 5.4 per cent. At one stage yesterday it had been ahead by 9 per cent.

Kingspan rose 1.6 per cent to close at €13.70 as investors were encouraged by the Cavan-headquartered firm’s prospects for the US.

Vicwest, a rival of Kingspan’s in the US, yesterday announced its insulated panels business there had grown sales by 29 per cent. Traders believe the US represents a good opportunity for the Irish company to expand beyond the UK and Ireland.

Aer Lingus was down 1.5 per cent by noon yesterday but recovered in the afternoon to close at €1.65, a drop of 0.72 per cent. Group CFO Andrew MacFarlane announced he is to leave the business.

LONDON
EasyJet climbed 3.7 per cent to 1,692 pence. The airline forecast a pretax loss for the first half of its financial year of £55 million to £65 million, narrower than a January prediction for a loss of £90 million.

The British home-improvement chain also said it would return £200 million to shareholders.

Royal Mail lost 3.2 per cent to 565.5 pence. Britain’s postal service said plans to cut about 1,600 jobs would contribute to a £100 million charge for its 2014 financial year. The company forecast total restructuring costs for the year of £230 million, ahead of a November projection of £160 million.

EUROPE
Deutsche Post rose 3.3 per cent to €26.95, for the largest gain on the German market. Shares posted their biggest two-day advance since December after Welt am Sonntag reported that the company will increase the profit target for its mail unit by 60 per cent.

Ray-Ban maker Luxottica increased 4 per cent to €40.50. The world’s largest maker of glasses will design, develop and sell spectacles that use Google Glass technology.

Baloise climbed 2.9 per cent to 112.30 Swiss francs after saying it plans to increase its payout to 4.75 francs. The insurer also reported a profit that climbed 3.7 per cent to 453 million francs last year.

NEW YORK
Carnival declined 5.3 per cent to $37.89. The world’s largest cruise line operator has been facing lower ticket prices and higher costs to attract customers hesitant about past incidents, including onboard illnesses and a fire.

Walgreen climbed 2.6 per cent to $65.99. The owner of pharmacies said it plans to close 76 drugstores in the second half of fiscal 2014. Synergies from its Alliance Boots business will be higher than previously estimated.

McCormick and Co advanced 5.2 per cent to $71. The maker of spices and other flavoured products reported first-quarter profit and sales that exceeded analysts’ estimates. – (Additional reporting: Bloomberg/Reuters)