Gold traders set their sights on $1,400 an ounce 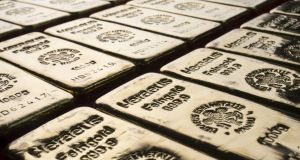 Gold traders are setting their sights on $1,400 an ounce, a price not reached since September. Photo: Bloomberg

Gold traders are setting their sights on $1,400 an ounce, a price not reached since September, as the worst standoff between the West and Russia since the end of the Cold War increases demand for the metal as a haven.

The most-traded bullion option on the Comex yesterday was a call giving owners the right to buy at $1,400 by April, with an estimated 1,972 lots changing hands. That compares with an average volume of 314 in the past month.

Investors are once again flocking to the precious metal, leaving prices poised for the biggest quarterly gain since 2007.

Russia’s growing military presence in Ukraine is the latest sign of global turmoil fueling the rally after slowing US economic growth and slumps in emerging-market currencies.

“Worries about a possible conflict are very constructive for gold, and we are seeing momentum traders come in,” Quincy Krosby, a market strategist for Newark, New Jersey-based Prudential Financial, which oversees more than $1 trillion of assets, said in a telephone interview.

“The mixed economic numbers out of the US and concerns about slowdown in other parts of the world have boosted demand for a safe-haven asset.”

Gold futures for April delivery gained 2.2 per cent yesterday to $1,350.30 on the Comex in New York, after touching $1,355, the highest since October.