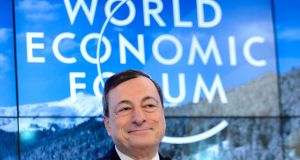 President of the European Central Bank Mario Draghi: many viewed his comments on Thursday as signalling further stimulus measures could be unveiled in March. Photograph: Fabrice Coffrini/AFP/Getty Images

The prospect of further support from the world’s central banks helped lift some of the gloom in global markets , with oil prices pushing back above $30 a barrel and US stocks heading towards their first weekly gain of 2016.

But the improvement in risk appetite only came after a number of benchmark stock indices slid into “bear market” territory — defined as a drop of 20 per cent from cyclical highs — and oil hit levels not seen for more than 12 years.

A clear trigger for the turnround in sentiment came from very dovish comments on Thursday from Mario Draghi, president of the European Central Bank, which many in the markets viewed as signalling further that further stimulus measures could be unveiled in March.

“Although the [ECB POLICY]meeting is seven weeks away, could Thursday have marked the start of another plate-spinning cycle from the central banks?” asked Jim Reid, macro strategist at Deutsche Bank.

“The market chatter is now looking towards [Bank of Japan governor] Kuroda to signal more action when the BoJ meet this time next week. Will [Federal Reserve chairwoman] Yellen also signal a more cautious and dovish stance at the Fed’s Open Market Committee meeting next Wednesday?”

Analysts at Nomura said that while Fed tightening expectations had diminished considerably, a move in June was still their base case.

On Friday, the prospect of further central bank moved appeared to unleash a burst of pent-up buying enthusiasm.

The pan-European Stoxx 600 rose 3 per cent, and was 2.6 per cent higher over the five-day period. The Nikkei 225 in Tokyo leapt 5.9 per cent on Friday, its best one-day showing in four months — but was still down 1 per cent on the week. In Dublin the ISEQ index closed at 6356, up 1.6 per cent on the day and fractionally up on its closing level one week earlier, after a number of volatile sessions.

US West Texas Intermediate crude swung through a similar trajectory.

1 How well paid do you think you are? Here’s how to work it out
2 Life as a Facebook moderator: ‘People are awful. This is what my job has taught me’
3 Wealthy investors’ legal challenge against Revenue fails
4 AIB to sell more than 500 ATMs to Brink’s
5 Accumulated profits at Marian Finucane firm exceeded €830,000
6 Dublin down nearly 4% as coronavirus hits markets
7 Coronavirus and the etiquette of working from home
8 Solar panels: Are they worth the investment?
9 New 24-storey tower for Cork city approved despite council concerns
10 Bank leaked my loan request to family who tried to rip me off
Real news has value SUBSCRIBE