Apple to report after US closing bell 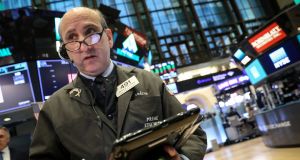 In New York, the S&P 500 and Nasdaq fell on Tuesday, as technology stocks pulled back. Photograph: Brendan McDermid/Reuters

European shares closed higher ahead of a blizzard of political, economic and corporate events, with a Brexit vote and Apple results on Tuesday and a Federal Reserve decision and Sino-US trade talks on Wednesday.

The pan-European Stoxx 600 index ended the day up 0.8 per cent, while London’s FTSE 100 rallied by more than 1.3 per cent ahead of the vote in parliament on Brexit.

Gains were spread among most sectors and bourses but Investors shunned stocks or indexes exposed to US-China trade, such as Frankfurt’s Dax, which limited its gains to 0.1 per cent or automotives, which fell 0.5 per cent. News that the United States levelled criminal charges against China’s Huawei before the new round of talks between Washington and Beijing added to the subdued mood.

The Iseq ended the session broadly flat at 5,848 on Tuesday with low trading volumes reported. Ryanair traded up 1.1 per cent at €10.92 after announcing it had acquired the remaining quarter of its Austrian unit Laudamotion for an undisclosed sum.

Fellow Iseq heavyweight CRH fell 1 per cent to €25.30 after a US rival reported a potential downturn in business on account of trade tensions between Washington and Beijing.

AIB rose 1.7 per cent to €4.06 amid a general lift for financials on the back of more positive Brexit news coming from the UK, where the bank has operations. Rival Bank of Ireland, however, fell 1.2 per cent to €5.59.

Cairn Homes dipped again, this time by 1.3 per cent, while rival Glenveagh fell 2.4 per cent on no specific company news and despite positive news from the UK housing sector.

British shares ended a five-day losing streak on Tuesday as investors sought safety stocks amid worries about the US-China trade spat and ahead of a parliamentary vote on Brexit. The FTSE 100 index added 1.3 per cent and the FTSE 250 rose 0.9 per cent on their best session in 10 days. prime minister Theresa May called on Britain’s MPs to send a message to the European Union that they would support her plans to renegotiate the Brexit divorce deal.

Dublin-headquartered food group Greencore rose 3 per cent to nearly £2 as shareholders mulled the company’s tender offer to disburse proceeds from the sale of the its US business last year. The tender price was set at £1.95 late last year. Gains in midcaps were restricted with Royal Mail – a former FTSE 100 constituent – slumping 13.3 per cent to a life low on a downbeat trading update and PZ Cussons tumbling 15 per cent to nine-year low after a profit alert. Domino’s Pizza slipped 8.7 per cent after guiding to profit at low end of the consensus range. Support came from Irish-headquartered UDG Healthcare, which surged 6.4 per cent on higher adjusted earnings forecast, and housebuilder Crest Nicholson, which jumped 6 per cent following a rise in revenue.

Trading was limited with FTSE 100 turnover at 88 per cent of the average 90 day daily volume, Stoxx 600 at 85 per cent and Dax at 77 per cent. The mood was, however, better in Europe than on Wall Street, where indexes were slightly in the red. Stephane Barbier de la Serre, a strategist at Makor Capital Markets, said European markets had catching up to do and that Wednesday’s US monetary meeting was making investors there more cautious.

Shares in Norwegian Air fell 14.5 per cent to 120.45 Norwegian crowns after it announced plans to raise three billion Norwegian crowns in a share sale to strengthen its finances, days after British Airways owner IAG ruled out a bid for the loss-making budget airline.

The European technology sector, down 0.5 per cent, was also among the few losers with SAP, Europe’s most valuable technology company, down 2.7 per cent after its results.

The S&P 500 and Nasdaq fell on Tuesday, as technology stocks pulled back, while concerns about the upcoming US-China trade talks and mixed earnings reports gave little impetus for markets to recover from a slide a day earlier. Wall Street sold off on Monday as profit alerts from Caterpillar and Nvidia raised fears that a slowdown in China and tariffs could take a bigger hit on profits. Technology stocks fell 0.9 per cent with Apple, set to report after market close on Tuesday, dipping 0.6 per cent. Amazon, Facebook and Microsoft, all scheduled to report later this week, fell more than 2 per cent. – Additional reporting: Reuters