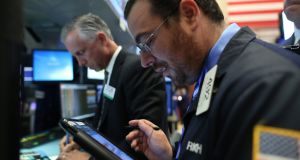 Wall Street stocks were little changed on Thursday evening after a raft of mixed quarterly earnings and the slide in oil prices kept investors on the sidelines.

ECB president Mario Draghi kept borrowing costs at record lows, sticking to his course of ultra-loose monetary policy, and said the bank would start corporate bond purchases and a new round of cheap bank refinancing in June.

Although details about the corporate bond purchase programme were seen as a boost, the fact that Mr Draghi did not mention the strength of the euro as a concern weighed on stocks, said Anthilia Capital Partners fund manager Giuseppe Sersale.

The Iseq index fell 1 per cent to 6, 150, tracking similiar trends in Europe. Ryanair shares 2.3 per cent of their value to end the day €12.95. This followed poor numbers by United Airlines in the US, which dragged the sector down.

Permanent TSB shares rose by 4.7 per cent to €2.88, albeit on slim trading volumes, while Bank of Ireland was marginally more positive on €0.25.

Swiss-Irish food group Aryzta was down 2 per cent at 34.27. The company’s shares remain in a holding pattern after shedding 50 per cent of their value in the past 12 months.

Packaging group Smurfit Kappa fell 1.3 per cent to €23.08, which was roughly in line with rivals. Paddy Power Betfair was down 2 per cent at €111.20 as investors await more news on the likely synergies involved in the merger.

The three property reits were down Green, Hibernia and Ires were down 0.4-1 per cent respectively.

The London market slid into negative territory as investors took flight from pay TV giant Sky after it signed up fewer new customers. Sky saw its shares drop more than 4 per cent as it said it won 177,000 new customers in the three months to March — 160,000 fewer than the previous quarter.

The FTSE 100 was down 28.8 points to 6381.4 despite a resurgence from banks and commodity stocks, with oil giants helped as the cost of crude leapt to five-month highs earlier in the session.

Among banks, Royal Bank of Scotland was up 4.1p to 253.6p ahead of next week’s raft of first quarter results from the major players. Shares in high street retailers were down after official figures showed an early Easter and the bad weather left retailers suffering a second successive month of falling sales.

The Office for National Statistics (ONS) said the quantities bought in the retail industry in March decreased by 1.3 per cent on February, on the back of a 0.4 per cent decrease the previous month.

Shares in Next dropped 105p to 5265p, while Marks & Spencer’s dropped 3.9p to 434.5p Equipment rental company Ashtead Group was the biggest riser on the London market after it said full-year results would come in at the top end of market expectations. Shares surged more than 3 per cent as the firm said it had also performed well in the fourth quarter.

The euro initially rose after Mr Draghi spoke but later was down against the dollar, as traders weighed the potential for a more hawkish Federal Reserve next week, helping the FTSEurofirst 300 index end off lows and down 0.3 percent.

Europe’s bank sector index outperformed to rise 1.4 per cent. The new round of cheap ECB money is seen helping the region’s lenders and the sector also saw a rally in Greek banking stocks on signs that Athens and its international creditors were making progress in talks on economic reforms.

Shares in Volkswagen rose 5.1 per cent after the carmaker and reached a deal with US authorities to address excess diesel emissions in nearly 600,000 polluting vehicles that will include buyback offers and a possible fix.

Expectations for first-quarter earnings are dismally low though, with S&P 500 index companies expected to post a 7.2 per cent fall in profit on average, and a 1.4 per cent decline in revenue, according to Thomson Reuters .

Verizon pulled the telecom sector down 2.17 per cent and weighed the most on the S&P 500. Verizon’s shares fell 0.3 per cent after the company said a strike by its wireline workers was expected to hurt earnings this quarter. Travelers fell 4.9 per cent to $110.10 after the property and casualty insurer reported a 17 per cent fall in profit.

American Express shares were up 1.2 per cent after revenue rose for the first time in five quarters, while Mattel sank 6.3 per cent after sales fell.