SABMiller rose 8.9 per cent, Anheuser-Busch was up 1.7 per cent after takeover offer 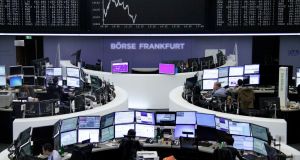 China’s exports fell less than expected in September, but a sharper fall in imports left economists divided over whether the world’s second largest economy’s ailing trade sector is showing signs of turning around.

“While Chinese exports posted a healthy rebound, weak imports are still indicating that the Chinese economy is continuing to struggle,” said Markus Huber, trader and analyst at Peregrine & Black.

Cars and miners were among the top sectoral fallers following the data. But Huber said some investors viewed the data a catalyst for more Chinese government and central bank action in the coming months, adding that the lower prices could tempt buyers back into the market.

The uncertain mood was reinforced by a survey by ZEW think tank that showed morale among German analysts and investors plummeted in October to its lowest level in a year.

SABMiller rose 8.9 per cent and Anheuser-Busch was up 1.7 per cent after SABMiller accepted an offer worth more than $100 billion from AB InBev.

SABMiller said it had indicated to AB InBev that its board would be prepared to accept the offer and had asked for a two-week extension to October 28 of a deadline set for its rival to announce a firm intention to bid.

In the banking sector, Credit Suisse was down 2 per cent and UBS fell 1.4 per cent after a report said the Swiss finance ministry would tighten capital requirements.

Portuguese banks were sharply lower for a second day, dragged down by political uncertainty over the new government after last week’s inconclusive elections.

Banco Comercial fell 7.2 per cent and Banco BPI was down 4.2 per cent.

“The fall is very much linked to the possibility of having a leftist government,” Luis Castro, a trader at Golden Broker in Porto, said.

LVMH fell 3.1 per cent after the luxury goods industry leader reported a mixed set of third-quarter revenue figures that revealed a strong rebound in cognac sales, particularly in China, but a slowdown at its fashion and leather business.

German-listed Leoni fell 32 per cent, the top STOXX Europe 600 faller, after warning on 2015 and 2016 profit, citing problems at its Wiring Systems business.