European markets fall on concerns of Trump tariffs on China

Markets report: Iseq fell 1.48% with Ryanair amongst the losers on the day 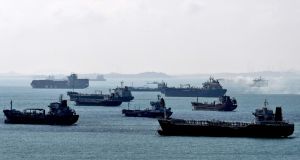 Oil major Royal Dutch Shell shed another 7.0 per cent on a ratings downgrade a day after it slashed dividend for the first time since World War Two. Rival BP was also down.

Markets took a turn for the worst on the first trading day of this month after US president Donald Trump threatened to slap new tariffs on China over the coronavirus crisis.

The Iseq all share index declined by 1.48 per cent on Friday, a poor start to May following gains toward the end of last month.

Ryanair was amongst the losers on the index, falling by 1.38 per cent to € 10.40 after the companied laid out plans to make thousands of workers redundant. The airline also updated the market on its forecasts, saying it now intends to carry fewer than 100 million passengers in the year to March 2021, more than 35 per cent below its original 154 million target.

But banks were the biggest losers on the day after their peer Ulster Bank said it swung to a loss in the first quarter of the year in the Republic as it took a €32 million net impairment charge in anticipation of a likely surge in bad loan losses as borrowers are hit by the Covid-19 pandemic. AIB dropped 5.66 per cent to close at €1.25 while Bank of Ireland declined 6.16 per cent to €1.84.

In food names, Glanbia and Kerry Group gained on the day with both up by more than 2.3 per cent. Meanwhile, Flutter Entertainment was another gainer, closing up by 2.9 per cent at €111.70.

A slump in energy company stocks led the UK’s FTSE 100 index lower on Friday, with sentiment also dented by US president Donald Trump’s threat to impose new tariffs on China over the coronavirus crisis.

Oil major Royal Dutch Shell shed another 7.0 per cent on a ratings downgrade a day after it slashed dividend for the first time since World War Two. Rival BP was also down.

The blue-chip FTSE 100 fell 2.3 per cent, also hit by miners and travel stocks.

The two-day slide for the index marks an abrupt about-turn in sentiment this week, with investors turning cautious about a revival in business activity even though several countries have started relaxing stay-at-home orders.

Most European markets were closed for May 1st holiday.

Data on Friday showed the lockdown measures were grinding the housing market to a halt, while another report said British manufacturers suffered the biggest fall in output and orders for at least three decades in April.

British Airways operator IAG fell 3.1 per cent as details of its plans to cut staffing, including a quarter of its pilots, and weather the collapse in air travel under the coronavirus continued to tumble out.

Low-cost airline easyJet slumped 5.8 per cent to the bottom of the FTSE 100 after rival Ryanair’s announcement. But British state-backed lender Royal Bank of Scotland gained 2.4 per cent as its quarterly results beat analyst expectations, thanks in part to a rise in income from a spike in trading in volatile markets at its previously loss-making investment bank NatWest Markets.

The consumer discretionary subindex came under pressure after Amazon. com said it could post its first quarterly loss in five years as it was spending at least $4 billion in response to the coronavirus pandemic. The e-commerce giant’s shares tumbled.

Apple’s chief executive Tim Cook said it was impossible to forecast overall results for the current quarter because of uncertainty created by the virus after the company reported sales and profits above expectations. Shares of the iPhone maker reversed earlier losses to trade higher.

United Airlines slipped 8 per cent after posting a first-quarter loss of $1.7 billion.

Australia’s economy is in recession for first time since 1990s