Markets rise on US employment figures 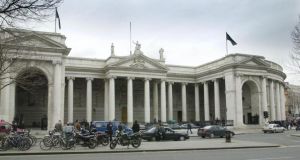 It was a day that proved bad numbers can still be good for stock markets as disappointing economic data from the US convinced investors that the Federal Reserve is likely to take its time about trimming its quantitative easing programme.

In Dublin traders said a weak morning was followed by an improved afternoon after investors began to digest the likely impact of disappointing US employment figures.

DUBLIN
Bank of Ireland had another good day, nearing 27 cent at one stage. Traders said there was momentum behind the stock for the past month and that this was being aided by the fact that if you want to buy some exposure to the Irish market then the bank’s stock was probably the best and easiest way to do so. The stock closed at €0.265, a rise of 2.32 per cent.

The Central Bank issued a statement about ESM-listed AIB, pointing out that provisions to prohibit the short selling of shares of Irish banks quoted on the main securities market of the Irish exchange, introduced in 2008, and which was lifted on December 30th, 2011, did not apply to shares in AIB from January 2011 when the bank’s listing transferred to Enterprise Securities Market of the Irish exchange. The AIB shares lost a massive 24.18 per cent yesterday to close at €0.16, but are still monstrously over-priced, according to traders.

CRH performed less well than its international peers to close flat at €18.16.

LONDON
Shares in Cillit Bang-to-Dettol firm Reckitt Benckiser powered ahead after it flagged the potential £2.5 billion sale of its pharmaceuticals division. The households products company gained 5.2 per cent as it also cheered investors with a better-than-expected set of third quarter trading figures.

Whitbread shares dipped despite another decent set of results from the owner of the Costa coffee chain and Premier Inn budget hotel business. Costa maintained its recent record of strong growth as its half-year profits rose by a fifth and helped Whitbread’s overall figure gain by 12 per cent to £216.1 million. Shares have risen by a third over the year to date but drifted lower – off 13p to 3359p – in the wake of the figures.

Royal Bank of Scotland recovered from the 5 per cent fall seen in the previous session to stand 8.9p higher at 362p, or 2.5 per cent.

EUROPE
European equities rose to a fresh five-year high in a broad-based rally.

Drug-maker Novartis climbed 2 per cent to 69.25 Swiss francs after raising its full-year forecasts.

Telekom Austria plunged 5.7 per cent to €5.92 after buying half of the 28 available frequency blocks in a spectrum auction in Austria for €1.03 billion.

Deutsche Lufthansa declined 2.4 per cent to €14.51 after saying it expects an operating result of €600 million to €700 million in 2014. That compares with €524 million last year, according to a company statement.

NEW YORK
US stocks pushed the S&P 500 to a new intraday record, after weaker-than-expected job creation last month validated expectations the Federal Reserve will maintain its economic stimulus into next year.

Netflix shares fell 6.4 per cent to $332.90, reversing the rise that followed the release of the company‘s earnings report on Monday.

Apple lost 0.4 per cent to $519.23, though losses ebbed after the company unveiled a new line of iPads.

Transocean shares rose 5.6 per cent to $49.18 after S&P Dow Jones Indices announced the drilling services company will replace Dell on the S&P 500 index after the close of trading next Monday. – (Additional reporting, Press Association, Bloomberg, Reuters)