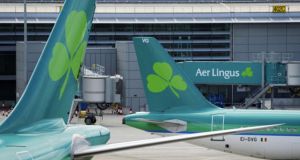 Stocks pushed higher yesterday as investors remain optimistic that economic growth is picking up, with many companies reporting better than expected results. The FTSE 100 closed the day at its highest level since October 2007, while the Stoxx Europe 600 was at its highest since June 2008.

DUBLIN
A flurry of strong interim management statements did little to the Dublin market yesterday, with the Iseq index of Irish shares finishing the day virtually unchanged at 3,975.

It was a good day for Aer Lingus which climbed 3.5 per cent to €1.44. One Dublin stockbroker attributed the gain to expectations its pension payment problem will be resolved.

Ryanair also finished the day on a positive note, albeit marginally, with investors cautious about results out next Monday.

Food group Glanbia came off Monday’s high of €11, declining to finish yesterday at €10.80.

Paddy Power was down nearly 1 per cent on light volumes despite issuing a solid interim management statement which showed its group net revenue was up 20 per cent so far this year.

Irish Continental Group declined 2.8 per cent to €21.29. The group yesterday reported a rise in revenue to €472.1 million for the first four months of the year, up from €70.4 million during the same time last year.

LONDON
UK stocks climbed, extending their highest level in 5½ years, as merger and acquisition activity in the utility industry offset a selloff by metal producers.

Severn Trent soared 14 per cent after confirming that a consortium of investors has approached it about a possible takeover.

Rival utility companies Pennon and United Utilities advanced 4.4 per cent to 695 pence and 2.8 per cent to 760.5 pence respectively.

Babcock International rallied 6.8 per cent after reporting a 14 per cent increase in full-year operating profit to £376.6 million. Babcock, which helps design submarines for the UK government, said that new contracts enabled it to grow.

Lonmin sank 7.3 per cent after halting operations at its Marikana mine in South Africa.

EADS advanced 3 per cent after earnings beat analysts’ projections. GDF Suez , Europe’s largest utility by market value, fell 0.9 per cent to €16.58, paring earlier losses of as much as 4.4 per cent.

German stocks advanced for a sixth day to a record high as shares of automakers rallied and Deutsche Post rose after reporting better-than-forecast earnings. Deutsche Post advanced 3.9 per cent to an almost five-year high of €19.56.

US
US stocks rose in early trading yesterday, with the Dow and the S&P 500 hitting new intraday highs as investors bet that the market’s upward momentum would keep going.

1 How long can Government afford to keep State pension age at 66?
2 How much will a Covid-19 vaccine cost?
3 Guinness brings out a non-alcoholic version of the black stuff
4 Frank Fitzgibbon stepping down as Sunday Times editor
5 How on earth do we the calculate the cost of Level 5 for the Irish economy?
6 Farm lobby seeks EU ban on vegan ‘burger’ and veggie ‘sausage’
7 Irish start-up Wayflyer raises €7.8m in seed funding
8 Google's incredible power is the result of decades of regulatory failure
9 Paul Coulson plans record $1.8bn Ardagh investment
10 Budget 2021: fuel prices rise and high-emission cars hit
Real news has value SUBSCRIBE