Trade divisions ahead of G7 meeting also weigh on investors 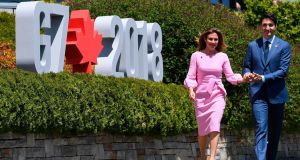 European shares fell on Friday as worries about global trade and an economic slowdown in the region weighed on investor sentiment ahead of a European Central Bank (ECB) meeting next week that could signpost plans to wind down its massive monetary stimulus.

Divisions on trade as G7 leaders’ summit got under way added to investors’ anxieties, although US equities later moved into positive territory.

The Iseq index closed little changed after a reasonably quiet session to end the week, with many of the main stocks just a little weaker. The Dublin market had a new entrant in Yew Grove, the latest real estate investment trust (Reit) to go public, and it closed at €1.07, up 7 cent on its float price of €1. However, there was not a lot of volume in the stock.

Britain’s leading stock index fell, tracking a broad sell-off by European shares as investors faced the prospect of tightening financial conditions and growing political risk. The FTSE 100 closed down 0.3 per cent for its third straight week of losses.

Financials were the biggest drag on the FTSE 100, as HSBC, Prudential, Lloyds and Barclays fell 0.3 to 1.2 per cent.

Satellite firm Inmarsat surged on takeover speculation to end the day 13.5 per cent higher at the top of the FTSE 250. After trading hours, the company confirmed US firm Echostar had made an acquisition proposal, which its board rejected on the grounds that it “significantly undervalued” Inmarsat.

Gold miner Fresnillo led the sell-off in mining and energy stocks, tumbling 6.4 per cent, while Antofagasta, Anglo American, and Glencore fell 1.7 to 3.2 per cent. Standard Life Aberdeen shares dropped 3.5 per cent, the biggest decline on the FTSE 100, after Lloyds Banking sold its remaining stake in the asset manager.

Losses in most sectors pushed the Stoxx 600 index down 0.2 per cent and Germany’s Dax index fell 0.4 per cent after data added to signs that Europe’s largest economy started the second quarter on a weak footing.

Italy’s FTSE MIB fell 1.9 per cent as unease about the new government’s spending plans put fresh pressure on Italian government bonds, while the governor of the Bank of Italy warned the country risked “falling off a cliff” if it didn’t carefully manage public spending. Italian banks slumped 2 per cent.

Kering was a bright spot, up 5.6 per cent as several price target upgrades helped shares in the luxury group recover from a heavy drop suffered on Thursday on worries that margins and growth in the sector may have peaked.

Wall Street made an early afternoon push higher as the risk-averse mood that gripped investors late in the week faded. The S&P 500, Nasdaq Composite and Dow Jones Industrial Average all turned positive after beginning the day in the red.

Apple was down as much as 1.6 per cent after a newspaper report said the company had asked its supply chain to manufacture about 20 per cent fewer components for iPhones in the latter half of 2018. US chipmakers Qualcomm, Intel and Broadcom were also lower, following the Apple report.