Gold and silver coining it in as bear market attracts buyers

Gold rebounds 16 per cent since June 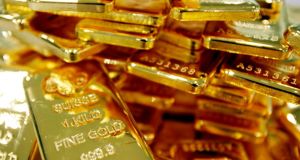 Gold rose to its highest value in almost two months and silver capped the biggest weekly rally since 2008 on signs of higher physical demand for precious metals.

Global bar and coin purchases reached a record last quarter and jewellery usage rose to the most since 2008, World Gold Council figures showed this week.

Purchases for gold and silver are climbing as lower prices attract consumers after both metals fell into bear markets in April. Gold has rebounded 16 per cent since reaching its cheapest level in 34 months in June, while silver yesterday entered a bull market, settling 24 per cent above its bear-market low.

“The rally that we are seeing is being supported by the buoyant physical demand,” according to Sterling Smith, a Chicago-based commodity futures specialist at Citigroup. “The mood is definitely bullish.”